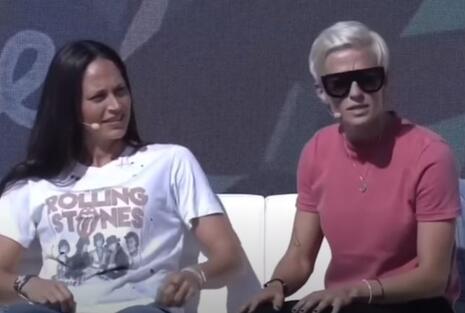 Sue Bird, one-half of the lesbian power couple that includes soccer star Megan Rapinoe, drew attention this past weekend from CNN for claiming her basketball league is less popular than women's pro soccer due to racial reasons.

Bird (appearing at left with Rapinoe in photo) told CNN's Don Riddell that, "Even though we're female athletes playing at a high level, our worlds, you know, the soccer world and the basketball world are just totally different.

"And to be blunt it's the demographic of who's playing. Women's soccer players generally are cute little White girls while WNBA players, we are all shapes and sizes ... a lot of Black, gay, tall women ... there is maybe an intimidation factor and people are quick to judge it and put it down."

Straight women's sports leagues? Where might they be hiding? Which planet?

In rebuttal to the first female couple of pro women's sports, consider this. Ratings for Bird's Seattle Storm team, in its recent title-clinching Game 3 win against the Las Vegas Aces, drew 27 percent more viewers on ESPN compared to the league's championship game in 2019. So stop the crying about racism.

Secondly, and aside from the higher proportion of African Americans playing women's basketball, the sports of round ball and women's soccer have one huge similarity in one distinguishing characteristic. Both sports are dominated by, and characterized by, lesbian cultures.

At last year's women's soccer World Cup, British media were astounded that 41 players and coaches were lesbians. This is especially true of Team USA. There were zero homosexual players at the men's World Cup.

"Women's Soccer Is a Very Dykey Sport" is the headline over Katie Herzog's 2019 post on The Stranger blog. "Dykes tend to be drawn to sports—and if you need evidence of this, it's the middle of WNBA season. Go check a game out."

Alex Binley, of ITV News, theorized that lesbianism in women's soccer "is more of a norm." And women's sports get less media coverage than men's sports, so sexual preferences draw a dimmer spotlight and less attention.

Third, the WNBA has no more right to moan "I wan't my damn respect" than LeBron James does. On Sunday, the league was featured by The New York Times because it's the "most socially progressive pro league."

"The women of the W.N.B.A. have made it a hotbed of activism, leading the way for higher-profile professional leagues in combining social action and sports," said NYT writers Jonathan Abrams and Natalie Weiner. The breadth of activism among its players is unparalleled among professional sports leagues, they say. No kidding!

In the past, WNBA players opposed state marriage amendment ballot propositions and kneeled during the national anthem. More recently Maya Moore and Natasha Cloud sat out the season in order to focus on social justice issues. The league dedicated 2020 to Breonna Taylor and players campaigned during games for a Democrat running against Republican U.S. Senator Kelly Loeffler in Georgia, who opposed the league's BLM activism.

Women's soccer is no different. Rapinoe and others denounce President Donald Trump and constantly force the LGBT agenda on their fans. Women's pro soccer and basketball both generate tons of positive reporting by adoring left-stream media lemmings.

And this is everything you need to know about why women's professional sports are such a huge turn-off for so many sports fans who don't appreciate left-wing politics, LGBT and BLM propaganda smeared in their faces.