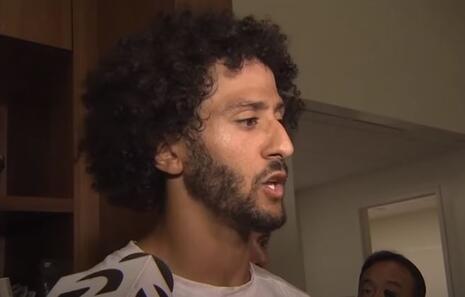 You thought Colin Kaepernick's cops are pigs socks were bad? Those are trifling matters compared to the torrent of cop- and America-hating vitriol oozing from his "Abolition for the People" partnership with Medium Publishing. At Kaepernick's bidding, a 30-story blitz is underway searing America as a racist nation while calling for the abolition of police and Immigration, Customs and Enforcement (ICE).

The first stories are available for (barely) stomaching and it ain't pretty. The movement has begun with poison pens ablaze, with a hate piece on President Donald Trump; a call for the abolition of ICE; and, among others, the queer and trans fight against police for liberation.

In the story "Older Black Folks' Whole-Body Hatred of Donald Trump", author Michael Arceneaux called President Trump "the demon in the White House" and "spiritually something akin to a boil on the left ass cheek of Satan." Black elders -- like the writer's mother -- have earned the right to be especially venomous to the white supremacist who, despite evidence to the contrary, is working to eradicate all of the gains made by Blacks since the Civil War.

It's a bad time to be Black in America, Arceneaux asserted, adding: "When a racist throwback promises to Make America Great Again — a campaign slogan previously popularized by other bigots like Ronald Reagan and Pat Buchanan — his intent shouldn’t be questioned."

As hateful of Trump as he is, Arceneaux says he can't match his 75-year-old mother's rage:

Imagine surviving Jim Crow and having to deal with White supremacy’s court jester in this stage of life. Knowing that your children and grandchildren not only have to contend with so many of the same problems you endured decades ago, but perhaps even worse realities should he be reelected. It must be so tiring to have to watch history repeat itself so often.

In an anti-ICE diatribe, Cristina Jiménez Moreta (a community organizer and co-founder of United We Dream) and Cynthia Garcia (an out queer and undocumented womxn) wrote: "Under the cover of post-9/11 antiterrorism, the Department of Homeland Security (DHS) has unleashed a carceral assault on immigrant families and children. ... While adapting to a new place, we’ve experienced some of the worst this country has to offer: workplace exploitation, wage theft, racial profiling, fear of deportation, and police violence."

They said President George W. Bush and DHS were responsible for an increase in racial profiling, xenophobia and government targeting of Muslims, Black immigrants and non-Muslim immigrants of color for detention and/or deportation. President Trump has worsened the immigration climate, the radicals contended:

In "The Queer and Trans Fight for Liberation — and Abolition," Dean Spade writes many police departments falsely portray themselves as LGBT allies. "Unfortunately, police harassment and violence, as well as brutal violence in prisons, jails, and detention centers, remain a central source of harm for queer and trans people."

Out of fear and distrust, LGBT activists are pushing back against law enforcement’s pro-LGBT branding and police participation in Pride parades. This is only a minor part of the "broader work queer and trans people are doing to abolish police, prisons, and borders." The system is broken and must be dismantled, they write, pushing Kaepernick's argument for same.

Queer and trans activists oppose attempts by police to co-opt their movement for liberation because they are "leading perpetrators of violence against queer and trans people, not our protectors. ... We don’t want our lives and the violence we experience used to legitimize the police or expand their ever-growing budgets in our names."

The queer and trans liberation movement seeks a world in which no one is exploited to enrich others and there is no violent standing army of police endangering people's lives. They say expanding police reforms are "devouring our communities."

And Kaepernick's apologists wonder why no NFL team has welcomed him with the radical and hateful movement he's unleashed.