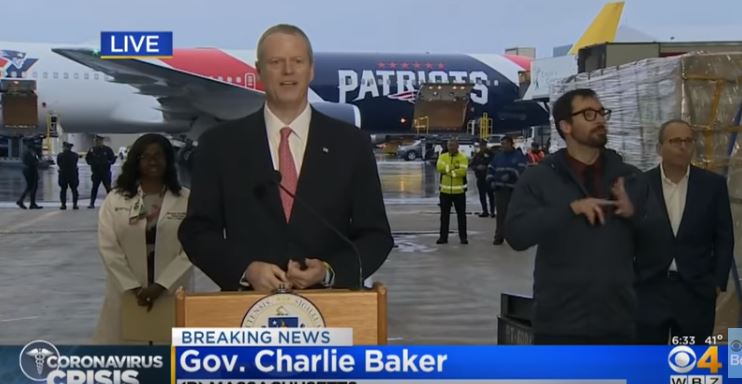 The much-hated New England Patriots can't even get a break from the media for using their team plane to bring facemasks from China to America. Jemele Hill, a notorious Trump hater, criticized the team's good deed simply because Patriots owner Bob Kraft is a friend of the president's. SB Nation writer Morgan Moriarty tore into the federal government for not doing what the Patriots did.
Hill, of the infamous 2017 Trump and his supporters are "white supremacist" tweet fame, defaulted to guilt by association in discounting the Patriots' humanitarian effort. On Twitter, her favorite tool of "destruction," she slapped down Kraft for donating to and empowering Trump's campaign.
That small-minded act in the face of the COVID-19 pandemic ignited Cleveland Indians pitcher Logan Allen. He tweeted his disapproval of Hill twisting "EVERYTHING" because of politics and for her being part of the problem: 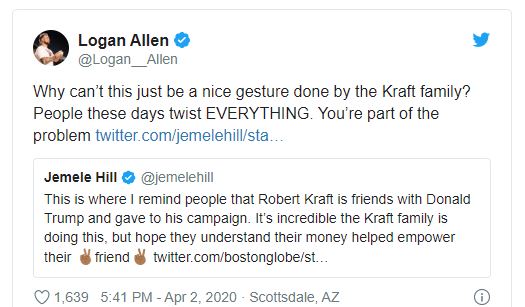 It was Massachusetts Governor Charlie Baker (seen in above photo) who asked the Patriots to transport the masks. The governor had been pleading to the federal government for weeks for more equipment, and he accused the feds of outbidding his state for supplies.

Most of the masks arrived on the New England team plane, and the remainder will arrive in a separate shipment.

“It is an honor for our family to be a part of this humanitarian mission,” Kraft said. “We knew that purchasing greatly-needed N95 masks and providing the Patriots plane to expedite their delivery to local hospitals would immediately help protect our courageous healthcare professionals.”

This feel-good story could have ended right there, but Moriarty's critical SB Nation story says the Patriots had merely done what the U.S. government should have been doing and accused President Trump of playing favorites with preferred states. Moriarty writes:

"Yes, it’s awesome to see financially willing and able citizens like Kraft step up in the midst of a crisis. But it shouldn’t have to come to this. It shouldn’t require a billionaire NFL owner to supply healthcare workers with the proper equipment they need to fight a deadly pandemic."

"Baker isn’t the only governor who’s faced this problem, and it’s affecting some of the states hit hardest by the pandemic," Moriarty adds. "California’s Gavin Newsom and Michigan’s Gretchen Whitmer have both publicly addressed the difficulties of acquiring supplies, while New York Gov. Andrew Cuomo compared bidding against states to being on eBay. New York, Michigan, California, and Massachusetts are all among the states with the highest number of confirmed cases."

Moriarty accuses Trump of playing favorites, giving Florida an unfair advantage because he owns an estate there. He overlooks the fact that, be it citizens or government entities, everyone is scrambling for crucial needs in this time of crisis, and suppliers are struggling to keep up with fierce demands. The only way to get through this pandemic is for the private sector to join in with government and provide solutions, like the Patriots did.