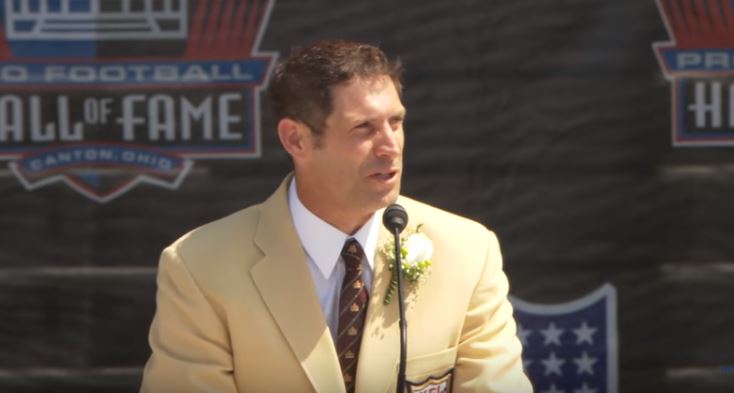 Even though he's a member of the conservative Mormon Church, Hall of Fame quarterback Steve Young is very San Francisco. Young just bucked his LDS church and his alma mater, Brigham Young University, by tweeting support for LGBTQ students at the school where people are protesting the church's opposition to same-sex relationships.

This is no new revelation for Young (seen during his 2005 Hall of Fame induction in photo), a descendant of Brigham Young himself, but nevertheless much in tune with Speaker Nancy Pelosi's San Francisco social values.

Young came out throwing Friday on social media, saying he stands with the students who are opposed to the values of the church and the university: 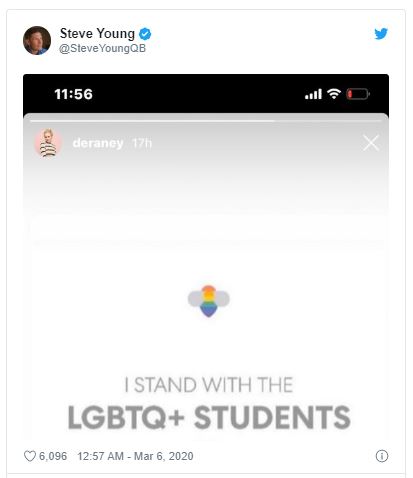 The brother of Young's wife Barbara is homosexual, and they have been opposed to marriage as the union of one man and one woman for several years. In 2008, California voters affirmed that ideal by passing Prop 8. Despite the LDS position on marriage and sexuality, the Youngs posted a sign in their yard in opposition to that ballot proposition.

In 2013, the Youngs not only attended the New Frontiers Conference affirming LGBTQ behavior, but served as its keynote speakers. They also support the Trevor Project and the Family Acceptance Project, both LGBTQ advocacy groups. Mrs. Young said, "One of the most beautiful things about this church is that it can evolve."

At that time, Steve Young said he wanted to "build bridges with my gay brothers and sisters" and “We need to see each other as Jesus sees us.”

The lefties at USA Today saw the Youngs' support for the LGBTQ movement as a potential sign of possible softening by the LDS Church, which was under fire because Mormons had contributed millions of dollars to the Prop 8 campaign. Uh, not likely to happen in a religion known for strong family units headed by a father and a mother.

BYU, where Young starred at quarterback on his way to that Hall of Fame pro football career, has a very strict set of standards forbidding sex outside of marriage. Acceptance for admission to the university in Provo, Utah, requires students to abide by the BYU Honor Code.

The university recently changed some of the code's wording on the issue of homosexuality in conjunction with a new handbook issued by the Church of Jesus Christ of Latter-Day Saints. In order to clarify confusion about the language changes, Elder Paul V. Johnson, Commissioner of the Church Educational System, issued a letter to faculty, staff and students at all LDS-affiliated schools, causing a small protest at BYU.

Johnson confirmed that, “Same-sex romantic behavior cannot lead to eternal marriage and is therefore not compatible with the principles in the honor code."

That's what prompted Young, a seven-time Pro Bowler, to defy his church and flaunt his support for the LGBTQ cause.