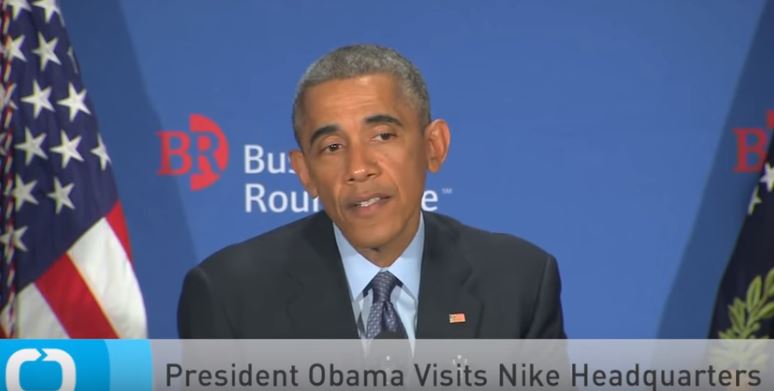 In a meeting of "Hope and Change" and the Swoosh, Nike announced a $5 million donation to an athletic facility at the Obama Foundation's planned presidential center in Chicago. Nike's latest progressive effort aims to help create a place to inspire, learn and reflect in honor of the former president who "brought his love of hoops from the South Side of Chicago to the White House."

The new facility will be part of the planned Obama Presidential Center on Chicago's South Side and will include new gardens, public spaces, a children's playground, scenic pathways for walking, jogging or cycling, as well as a spacious lawn with a gentle slope for sledding in the winter and picnics in the summer ... if the plans ever move beyond the blueprints.

Jorge Casimiro, Nike's chief social and community impact officer and president of the foundation, explained more about this idealistic creation intended to honor the former president who was obsessed with basketball, in a post on the Nike website:

"It’s all part of a new kind of presidential center: a place to inspire, a place to learn and a place to reflect, but also — as befitting a president who brought his love of hoops from the South Side of Chicago to the South Lawn of the White House — a place to grab some friends and get active. As President Obama [seen in photo during 2015 visit to Nike headquarters in Oregon] declared when he unveiled his plans for the center, 'It wouldn’t be the Obama Presidential Center without a place to play some ball.'”

The Obama Foundation's website explains more about the park's purpose: for the Obamas to glorify the people they admire most -- themselves.

Kim reports, "Other highlights of the center include a new museum celebrating America's first ever African-American president and first lady. It will chart the history of Obama's presidency, exploring 'the eight years of progress, setback, and hope that followed.'"

The exterior design of the museum "embodies the idea of ascension—of a movement upward from the grassroots," and has been inspired by the idea of four hands joining together to recognize "that many hands shape a place," the Obama Foundation website boasts.

Kim says the library is considered one of Chicago's "most highly anticipated architectural projects," but donors are cool to the whole idea. Construction on the $500 million presidential center was supposed to have begun in 2018, "but has been delayed with the foundation struggling to raise the finances just to break ground." Perhaps if the Obama presidential legacy included more meat than basketball, the donation dollars would be rolling in fast and furious by now.

Plugging Obama's hope and change mantra, Casimiro said both foundations "believe people, especially young people, can change the world, particularly through sport... At the end of the day, it is going to be a symbol to the world and visitors about why this is important.”

Doesn't that last statement just say it all! So far, there's a whole lot more symbolism than fresh concrete on Chicago's South Side. In fact, the inaction of donors are not exactly a vote of confidence for the former president. And if Barack Obama said, "You didn't build that," this time he'd be correct.

In recent years, Nike has focused heavily on campaigns touting progressives and social justice warriors, such as LeBron James and Colin Kaepernick. The Obama donation is another statement by Nike reinforcing its far-left progressivism.