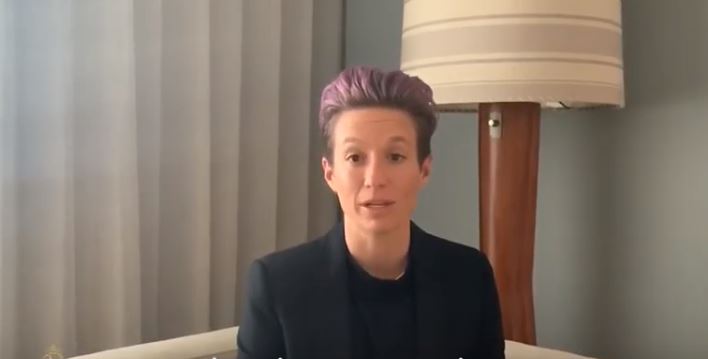 Megan Rapinoe is no longer satisfied calling the shots just for women's soccer. She's demanding that male soccer superstars get with the social justice program, too. Cristiano Ronaldo, Leo Messi and Zlatan Ibrahimovic need to get woke and help clean up the problems plaguing men's soccer, Rapinoe said.

In USA Today, Chris Bumbaca reported that after social justice queen Rapinoe won the Ballon d'Or as the world's top soccer player Monday (see photo of her in acceptance video, right), she called on high-profile male stars "to join her cause and correct the issues that plague the men's game."

"I feel like yelling, 'Cristiano (Ronaldo), Leo (Messi) and Zlatan (Ibrahimovic), help me,'" mouthy Megan demanded. "These huge stars are not engaged, not active, nor involved in anything and therefore there are tons of problems in the men’s soccer world. Are they afraid of losing everything? They believe so, but it’s not true. Who’s going to kick out Messi or Ronaldo from the game of soccer for a declaration about racism or sexism?"

Afraid of losing it all? Maybe they know something Megan doesn't know: like, uh, their job is soccer, scoring goals, not making a spectacle of themselves by kneeling, engaging in political theater and following the radical lead of has-been Colin Kaepernick.

Whatever their reasons for sticking to sports, the international male soccer superstars "are not as keen on speaking out as Rapinoe is, and she said she hopes that changes as the game continues to battle racism and sexism," Bumbaca wrote.

The left-stream sports media couldn't get enough of Rapinoe, the wonder worker seeing as how they're giving her more coverage in the offseason than most players who behave respectably get in-season. USA Today has been a consistently huge ally and The Guardian called her a "global sensation" and "America's Badass Sweetheart."

"Rapinoe led the women's national team to gold at the World Cup in France this summer and took home the Golden Boot as the top player in the tournament," Bumbaca continued. "During the team's victory tour, she was the leading voice in the publicized fight for equal pay compared to the men's national squad."

Rapinoe's activism never ceased to amaze her rapt media suck-ups. "When asked if she was more of a player or activist at this point in her career, Rapinoe said the Ballon d'Or awarded both," Bumbaca adds.

The lesbian forward who last summer said her play at the 2019 World Cup was a "big F-you to Trump," was just as impressed with herself as USA Today, The Guardian and other media lemmings were:

On one hand, I’m a really great soccer player. On the other hand, my play off the field brought me support because people understand that I am working on finding solutions for problems in our society. Then I act to find solutions in our society. The idea is to give force to other people so they can speak louder and more forcefully.

This miracle worker still has a lot of societal problems to solve when she isn't grabbing awards, showboating on the soccer field and telling the world what a "badass" team the U.S. women's national team had.

"I’m lucky to have a certain talent to lead fights," Rapinoe said, further demonstrating her lack of humility. "I’m not afraid of microphones, so I say what needs to be said. I’m fortunate to be able to travel to different conferences, to different meetings, to meet different people, but if things need to be better in the world, I’m positioned to be on the front line."