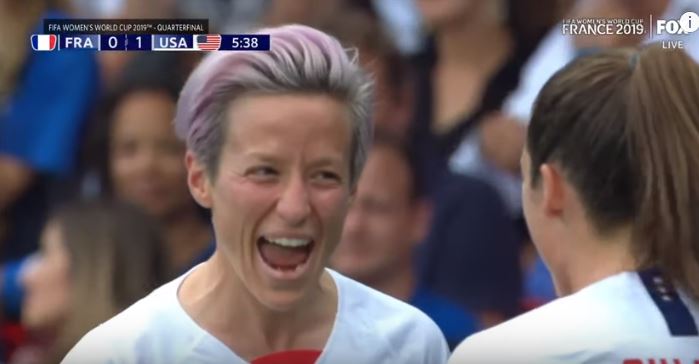 Over the weekend, USA Today's coverage of the U.S. women's national soccer team's play in the World Cup in France could have easily been thought of as a well-coordinated attack on President Donald Trump. Saturday's online edition carried three politically charged stories on the soccer team — one-fourth of the day's "Top Stories" list — paying little attention to the team's actual play on the field.

One of the left-stream partisan paper's major themes is that President Trump attacked one of the team's best players, Megan Rapinoe (at left in photo after scoring a goal vs. France Friday). Unprovoked, Rapinoe blasted Trump more than a month prior to the World Cup and has continued her beef since. Less than a week ago, she said, "I'm not going to the fucking White House." Trump responded to that on social media, which was his first entrance into the dispute she started weeks earlier.

Yomtov's story noted, "Several U.S. women's national team players have said they won't be visiting Donald Trump in the White House after the World Cup, so Rep. Alexandria Ocasio-Cortz (D-N.Y.) extended an invitation to the team to tour the House of Representatives."

After Friday 2-1 win against France in the quarterfinals, AOC tweeted: "It may not be the White House, but we’d be happy to welcome @mPinoe & the entire #USWMNT for a tour of the House of Representatives anytime they’d like."

"@mPinoe" is Rapinoe, the U.S. player who's been waging an anti-Trump campaign for several weeks and who stands silently without her hand over her heart during the pre-match national anthem, already accepted the socialist representative's invitation. "Consider it done @AOC", Rapinoe responded.

Yomtov called Trump's Wednesday three-part tweet calling on Rapinoe to respect the flag and extending an invitation to the whole team to visit the White House, win or lose, a "tweet firestorm." He wrote, "Trump raged at a months-old video of Rapinoe saying she is 'not going to the (expletive) White House.'"

That same day, American player Ali Krieger made headlines by tweeting that Trump gets angered by women he "cannot control or grope." But it's Trump who's attacking these woke soccer players, not the other way around, according to USA Today's slanted narrative.

"After President Donald Trump made Megan Rapinoe the target of his latest Twitter rage storm, Krieger fired off a fiery tweet of her own, saying, “I know women who you cannot control or grope anger you.”

Armour kept to the "script" quite well: "Trump had taken issue with a months-old video of Rapinoe saying she wouldn’t go to the White House, as well as her even older stance on the national anthem. With the story making headlines on both sides of the Atlantic Ocean, and the game against France looming, it had the potential to become a distraction for a team that has talked frequently of maintaining a bubble."

That "older stance on the national anthem" is a regular occurrence in the World Cup, where the U.S. has played five games and Rapinoe has snubbed it five times.

Krieger was quoted as saying of her "grope" remark, "“It doesn’t take lot of mindspace to tweet something like that, that’s really important, and then refocus and turn it off,” Krieger said. “Women can multitask. Imagine that, that we can do two things at once." Yes, play soccer and attack the president of the most powerful nation on earth simultaneously -- a real talent!

Of Rapinoe's defiance, Krieger said her teammate is "just a great representation of what our country is all about" and "I’m grateful to be one of her friends.” To which the Trump-hater Armour closed: "And the whole world knows it."

Armour's second story was purely a puff piece on Rapinoe. She said that by scoring both goals in the 2-1 U.S. victory in Friday's quarterfinal match, Rapinoe had gotten the "last word" on Trump. The opponent was actually France, not POTUS. Again, Rapinoe was portrayed as the innocent victim:

"Being the center of an international firestorm is no one's idea of fun, and most people would still be curled up in a ball if they'd been on the receiving end of a raging Tweet storm by President Donald Trump, as Rapinoe was earlier this week. Over months-old comments she made about visiting the White House and her even older stance on protesting during the national anthem, no less.

"But Rapinoe isn't wired that way. The Tweets, the criticism, the 'total (expletive)show circus' that she hoped the U.S.-France quarterfinal would be? She doesn't shrink from any of it. She thrives on it."

Obsessed with Trump and Rapinoe, Armour had earlier in the week written "Trump learns he can't bully Rapinoe" and "Trump demeans himself by raging at Rapinoe." Out of all her stories on the topic, remarkably only one is labeled "opinion."