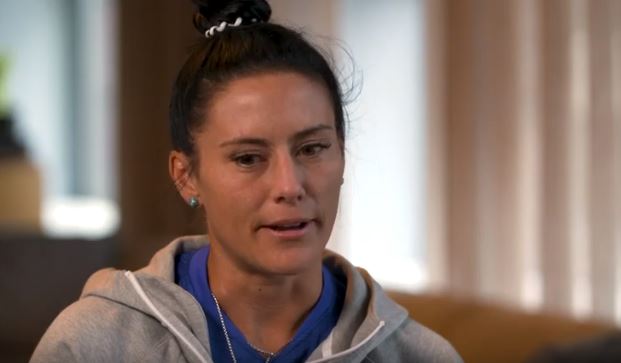 The circus surrounding the U.S. national women’s soccer team expanded on Wednesday. Headed for a Friday quarterfinal match against France in the World Cup, a prominent member of Team USA accused President Donald Trump of getting angry with women he can't grope. He let loose an early morning flurry of Tweets saying the team should respect the flag, and he inviting the team to the White House win or lose. USA Today’s anti-Trumper sports staff predictably sided with the soccer team and bashed the president.

The soccer team occupies one circus wing with its players' nasty behavior. On Tuesday U.S. soccer player and national anthem protester Megan Rapinoe said that if the team won the World Cup, "I'm not going to the fucking White House." USA Today's Nancy Armour occupied the second ring of the circus, defending Rapinoe and publishing a diatribe against President Trump:

"Score another one for Megan Rapinoe.

"She said after the U.S. women advanced to the World Cup quarterfinals that she hoped Friday’s game against host France would be a 'complete spectacle,' a 'total (expletive)-show circus.' President Insecurity has now assured that.

"Whether it was his bruised ego or that he just can’t stand having the conversation be about someone else, President Donald Trump took to Twitter Wednesday morning to rage at Rapinoe, her old comment about visiting the White House and her even older policy of not singing during the national anthem.

"All he managed to do was make himself look (more) foolish." 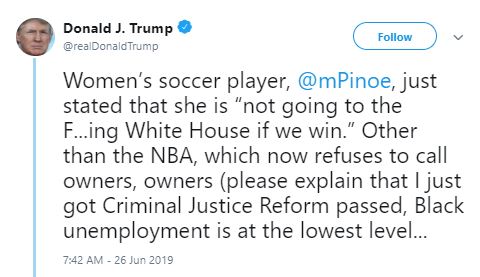 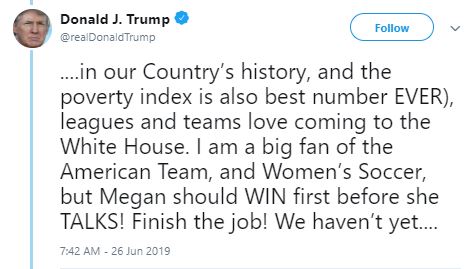 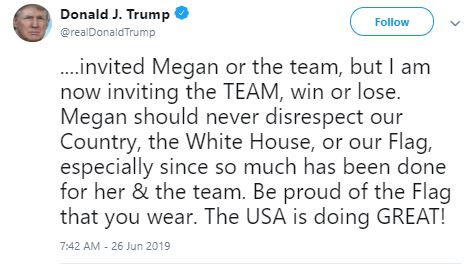 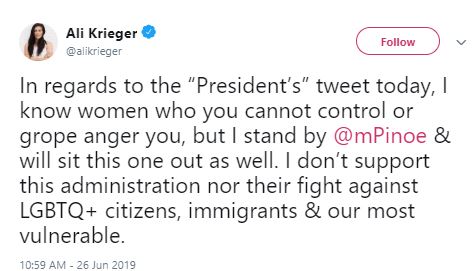 Armour launched yet another broadside attack on the President, saying there are few things Trump loves more than stoking a good culture war. He's also causing a scene to distract attention away from Robert Mueller's testimony before Congress, she claimed:

"Rapinoe is well aware her acts of protest can be a flashpoint, and she doesn’t much care. That’s the point. Our rules of law, our cherished traditions, our very democracy are being eroded by Trump and his sycophants, and drawing attention to that is far more important to Rapinoe than what people might think of her.

"Even if it’s the president. Especially when it's this president."

ESPN was also reporting on Wednesday that a third U.S. player, Alex Morgan, will boycott the White House if there is a visit.

Team USA is also suing U.S. Soccer for gender discrimination, and members of the team are also crusading for LGBT rights. Its play on the field is strong, but its actions off the field and those of its media apologists are more explosive.