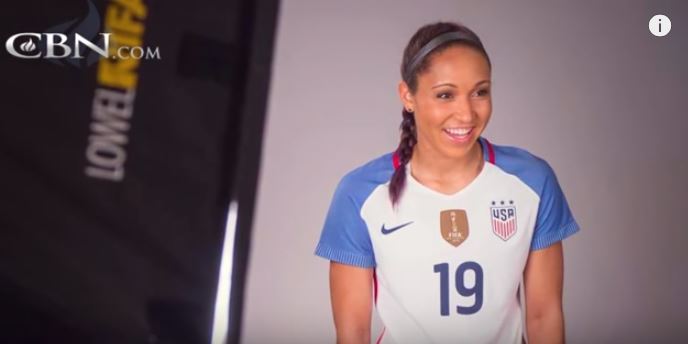 One can make a strong case that the only reason Jaelene Hinkle was invited last week to the U.S. national women's soccer team training camp was to avoid accusations of blackballing a Christian player. But the invite appears to be a sham; she was cut just five days after the call-up, amid hateful LGBT rants against her. Eric Adelson, columnist for Yahoo! Sports, examined how this controversy represents a collision of Christianity and the LGBT movement at the intersection of sports.

The national team's colors are more rainbow-themed than red, white and blue. The coach and key players are lesbians, the prevailing culture is LGBT. Thus, Adelson's description of the straight Christian woman Hinkle as "the most polarizing player in U.S. women’s soccer." Last year the devout Hinkle declined an opportunity to play for the national team because of its rainbow-themed pride month uniforms. It made her a marked woman for the unforgiving LGBT Left and its lapdog media.

Adelson recognizes Hinkle's choice of conscience and faith, then writes: "For many in the LGBTQ community, and elsewhere, it was a disgraceful show of homophobia. There was debate in the soccer community about whether she would ever get another shot at the national team, and Hinkle herself accepted that her decision may cost her a childhood dream.

"On July 18, however, she got a call-up. And the reaction was fierce."

A U.S. soccer spokesperson said, “It was based on performance.” But Adelson says Hinkle plays a position of need for the national team, and Katelyn Best, a writer for the pro-LGBT SBNation says Hinkle is “the best left back in the league by a country mile.” Paul Riley, head coach of the Courage, is frustrated by the quick decision to cut her. He says Hinkle “should be on the national team's roster. She’s good enough, intelligent enough, quick enough. I don’t know how you can make the decision in two days.“

You can if the whole thing was a charade. Now Coach Ellis has gotten the Slate and SBNation LGBT water carriers off her back.

Adelson wrote, "Best broaches the possibility that the call-up was simply to stem any belief that Hinkle had been blackballed. Then the ultimate decision was to stem the backlash. In this scenario, Ellis was trying to appease everyone. There’s also a more banal scenario: Hinkle didn’t have a great tryout." He further theorized:

According to Adelson, a source close to the national team says there was no revolt, disruption or distraction among the several lesbian players on the national team over Hinkle’s call-up. She fits in on her North Carolina team, is very coachable and has played on pride nights for her pro team. She is reaching her prime and improving rapidly.

Adelson cited "all the fans who feel she (Hinkle) is an incorrigible villain for having her views" and "fans who are delighted at how she sacrificed for her faith. There is a passionate argument in saying no one should tell Hinkle how to live her life. There is also a passionate argument in saying Hinkle is tacitly telling everyone else how to live their lives."

This story is not over. The U.S. "rainbow warriors" are preparing for the Tournament of Nations now, but in the run-up to next year's World Cup Hinkle could again be blackballed for her faith. That's "tolerance," LGBT style, not to mention a warning to young girls with aspirations of playing for Team USA that they might need to fit a certain sexual orientation to make the team. And they can check their faith at the stadium gates.