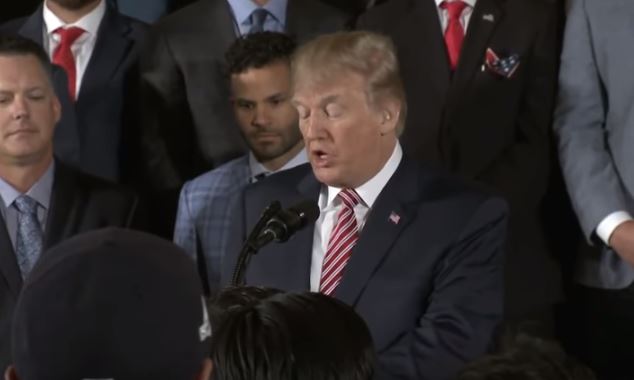 Big problem for lib sports media this week: How to spin the World Series champion Houston Astros' visit to President Trump at the White House Monday? How to make 45 look bad? At least the NBA champion Golden State Warriors, after a war of social media words with President Donald Trump, didn't even go to the White House last year. Now there's a story that got traction!

Jason Foster of The Sporting News explained why championship team visits to the White House command such high interest among media liberals: "Whether to visit the White House after a championship has become a political statement in the Age of Trump, as players and teams wrestle with the perception and reality of hobnobbing and joking with a president and an administration that are seen by many as intolerant, racist and any number of other negative labels."

Media looking for red meat surrounding the Astros' White House visit could center a story around pitcher Ken Giles, all-star shortstop Carlos Correa or outfielder Carlos Beltran, none of whom were there yesterday. Surely they detest Trump the racist and wanted to make a statement.

Giles cited family reasons, so that's one out.

Beltran is a better bet. He previously criticized the president's handling of government relief for hurricane-damaged Puerto Rico. But what's this Beltran quote spoiling a great potential story? "I wish [Astros players] the best over there. I hope they have a great time, enjoy their day, with what it comes to visit the White House.” That was Beltran playing killjoy. Two outs.

Leaving Correa. The Washington Post took him and ran with him in the headline: "The Astros visited President Trump at the White House, but Carlos Correa didn’t join them." Only this story line is full of holes, too. The New York Post quoted Correa's explanation:

“It was not politics or anything. It was just that the day off was perfect to be able to provide some help for the people in Puerto Rico in need.”

“I didn’t think it was right for me to go and talk to the president about Puerto Rico when we were going there for the team, for the amazing year we had and for what we brought to the city of Houston. It’s an honor to be invited to the White House. I want to thank the president for all the help he provided to my second hometown, which is Houston, and some of the help he’s provided to Puerto Rico, but we’re still in need in Puerto Rico.”

Even ESPN got this one right. But for anti-Trump media, it's three outs.

That leaves only the team members who were in attendance at the White House. American League MVP Jose Altuve (on President Trump's right in photo above) just didn't look happy about being there. He may have been seething with contempt for Trump.

"When Astros manager A.J. Hinch expressed how he was honored to be at the White House, Altuve couldn’t even muster the will to applaud.

"If Southwest Airlines wants to revitalize their 'Wanna get away' campaign, they should probably incorporate some footage of Jose Altuve from the Houston Astros' visit to the White House on Monday. The Word Series champions were in the nation's capital to be honored by Donald Trump, and Altuve looked like he would rather have been anywhere else in the world than in the same room as the president.

"After Trump singled Altuve out for his MVP campaign last season, Altuve shared an awkward handshake and a forced smile with The Donald."

Matt Bonesteel of The Washington Post wrote "we can't read Altuve's mind, so unless/until he comments on the situation we're left to wonder what he was thinking as the president congratulated him and his teammates on their World Series win. But based on appearances, it doesn't seem like it was anything pleasant."

The Post couldn't read Altuve's quote either. Here's what KPRC TV of Houston reported Altuve said about his demeanor during the ceremony honoring the team:

"The president was talking. What do you want me to do? I was just standing there listening. It was an honor to be there. If I didn't want to go, I just wouldn't go."

For those media aiming for a big win at the president's expense, it looks like he pitched a shutout.