So much love. So much hate. Too little diversity! Too much entitlement. Whether you watched little or much of the 2018 Winter Olympics on NBC, are you ready to throw one more competition on the bonfire of "sports I used to enjoy"? You're not alone. Join us now as we review the thrill of victory and the agony of politically debased sport brought to us and tarnished by NBC and other left-stream media.

It was the most diverse Winter Olympic team ever sent into athletic competition by the U.S. Olympic Committee. The Washington Post's Rick Maese lectured us it was a matter of "Trying to make Team USA look more like America":

"Yes, USOC officials are pleased the team includes more African Americans and Asian Americans — and even the first two openly gay men — than recent winter squads. But they also realize this year’s U.S. Olympic team, not unlike those of most other nations gathering in PyeongChang this week, is still overwhelmingly white."

And overwhelmingly mediocre. In case you hadn't seen it with your own eyes, the most diverse team netted just 23 medals, America's lowest medal haul in 20 years!

2. Everybody Loves Adam, Gus and Johnny

NBC squeezed every ounce of fabulous it could out of its cherished LGBT story line, obsessing on the two homosexuals on the American team: Gus Kenworthy and Adam Rippon. The Peacock even tried to hire Rippon after he finished 10th in the men's figure skating. Good Morning America's Robin Roberts told Amy Robach to give him a big hug. As for Kenworthy, ESPN diversity apologist Alyssa Roenigk in "Depth in Winter 2018: The unforgettable stories from Pyeongchang" that he finished last in slopestyle, "but aware of what his presence in an Olympic final meant beyond the competition." One would hope so, because, athletically, it meant squat.

If Gus and Adam worship didn't move your hand to the remote control, maybe bizarre figure skating commentator Johnny Weir did. Mr. Star-in-the-Hair delighted the LGBT crowd and Romper (if no one else), which raved that people are "living" for his outfits:

"Weir isn't afraid to make a statement with his outfits, which has been clear. But on Sunday, during the closing ceremony, his style came to a head and showed just how big of a star he really is — literally. Weir wore the most fabulous white suit you will ever see with a bedazzled shooting star stuck in his updo. Needless to say, people on Twitter were seriously impressed by Weir's penultimate look for this year's Olympics."

Don't you love it when people defy stereotypes? Let us know if you see one.

3. Everybody Hates Trump and Pence

The Games hadn't even begun yet and the media coaxed a promise from skier Lindsey Vonn that she would not attend a post-Olympics White House visit. "Well I hope to represent the people of the United States, not the president," Vonn told CNN's Alpine Edge. Then CBS whined that Vonn was getting bullied on social media!

Many media hailed Rippon as a hero for saying he was not happy that Vice-president Mike Pence would lead Team USA in the Games' opening ceremony. Asked by USA Today if he would meet with the VP, Rippon responded, "You mean Mike Pence, the same Mike Pence that funded gay conversion therapy? I'm not buying it."

Medal-winning Olympic bobsledder Lauren Gibbs took a selfie with Ivanka Trump and White House press secretary Sarah Sanders and posted it on social media with the message “#Itsforamerica it was a pleasure to meet you both!” Angry libs roasted Gibbs, an African-American, unleashing a barrage of hate. Media posted many of these angry tweets, letting them do the dirty work.

They're not sticking to sports again. Did you pull out your Cool Runnings DVD? Oh, er, never mind. The Washington Post says Cool Runnings is “offensive,” and “traffics in racist tropes.”

North Korea is one of the world's most evil regimes, but the media swooned over its cheer slaves and sighed dreamliy over the sister of dictator Kim Jung Un. (She's also deputy director of the Hermit Kingdom's Propaganda and Agitation Department.) Buck Sexton, writing on The Hill, described the appalling media behavior as an embarrassing and morally indefensible effort to normalize North Korean propaganda with the games as backdrop and Trump administration as foil. Newsbusters' Nicholas Fondacaro identified the worst of the worst, and here's a short sampling 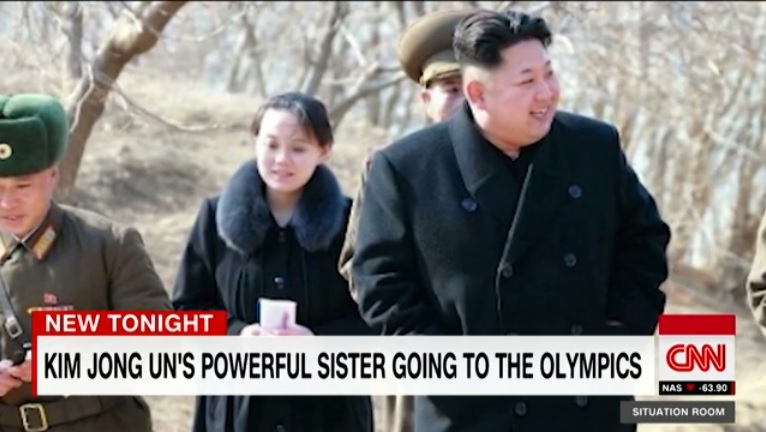 CNN writers Joe Sterling, Sheena McKenzie and Brian Todd with the story "Kim Jong Un's sister is stealing the show at the Winter Olympics": "If 'diplomatic dance' were an event at the Winter Olympics, Kim Jong Un's younger sister would be favored to win gold. With a smile, a handshake and a warm message in South Korea's presidential guest book, Kim Yo Jong has struck a chord with the public just one day into the PyeongChang Games." She must being something right north of the DMZ too. She's of the few among the Kim clan that hasn't been executed in imaginatively horrible ways.

The New York Times' Motoko Rich and Choe Sang-Hun made an inglorious entry here, too: Fondacaro wrote, “Kim Jong-un’s Sister Turns on the Charm, Taking Pence’s Spotlight,” their headline said. They also highlighted the loony analysis from a radical college professor who claimed: “The fact that he and Mrs. Pence didn’t stand when the unified [North and South Korean] team came in was a new low in a bullying type of American diplomacy.”

Did you throw anything at your flat screen?

Before the games even began there was a particularly ugly little controversy with the U.S. team. This little flap, over who got to carry the national flag in the opening ceremony, had it all: poor stportsmanship, entitlement and, of course, identity politics. As CNN explained, "The flag bearer is typically chosen in a vote of the eight US winter sport federations," that represent the different sports on the team.

As agree in advance a tie is broken by a coin toss. Much-decorated women's luger Erin Hamilton tied similarly decorated speed-skater Shani Davis 4-4. What ensued was one of the darkest episodes of discrimination in the long catalog of American racial sins: the first-ever racist coin toss. Hamilton won. Davis didn't attend the opening ceremony, and tweeted, "I am an American and when I won the 1000m in 2010 I became the first American to 2-peat in that event. @TeamUSA dishonorably tossed a coin to decide its 2018 flag bearer. No problem. I can wait until 2022. #BlackHistoryMonth2018 #PyeongChang2018."

After snowboarder Shaun White won his third gold medal he took an American flag, draped it over his shoulder and then dragged it on the ground. After a season's worth of pro football players kneeling during the national anthem, chasing conservatives away from the sport, the timing could not have been worse. CBS reported, "Twitter took notice, and a lot of people were angry. And then a lot of other people got mad that people were freaking out at Shaun White for doing such a thing, since it wasn't intentional."

Just four days into the Games, Vanity Fair's Laura Bradley filed a post on NBC's gaffes. Katie Couric was at the head of her list for these remarks:

“All but five of the 110 medals they’ve won have been on the speed-skating oval,” Couric said during Friday’s opening ceremonies. “Now, ‘Why are they so good?’ you may be asking yourselves. Because skating is an important mode of transportation in a city like Amsterdam, which sits at sea level. As you all know, it has lots of canals that can freeze in the winters. So, for as long as those canals have existed, the Dutch have skated on them to get from place to place, to race each other, and also to have fun.”

Yeah, no. If that was ever true, it isn't now and the Dutch roundly criticized Couric. 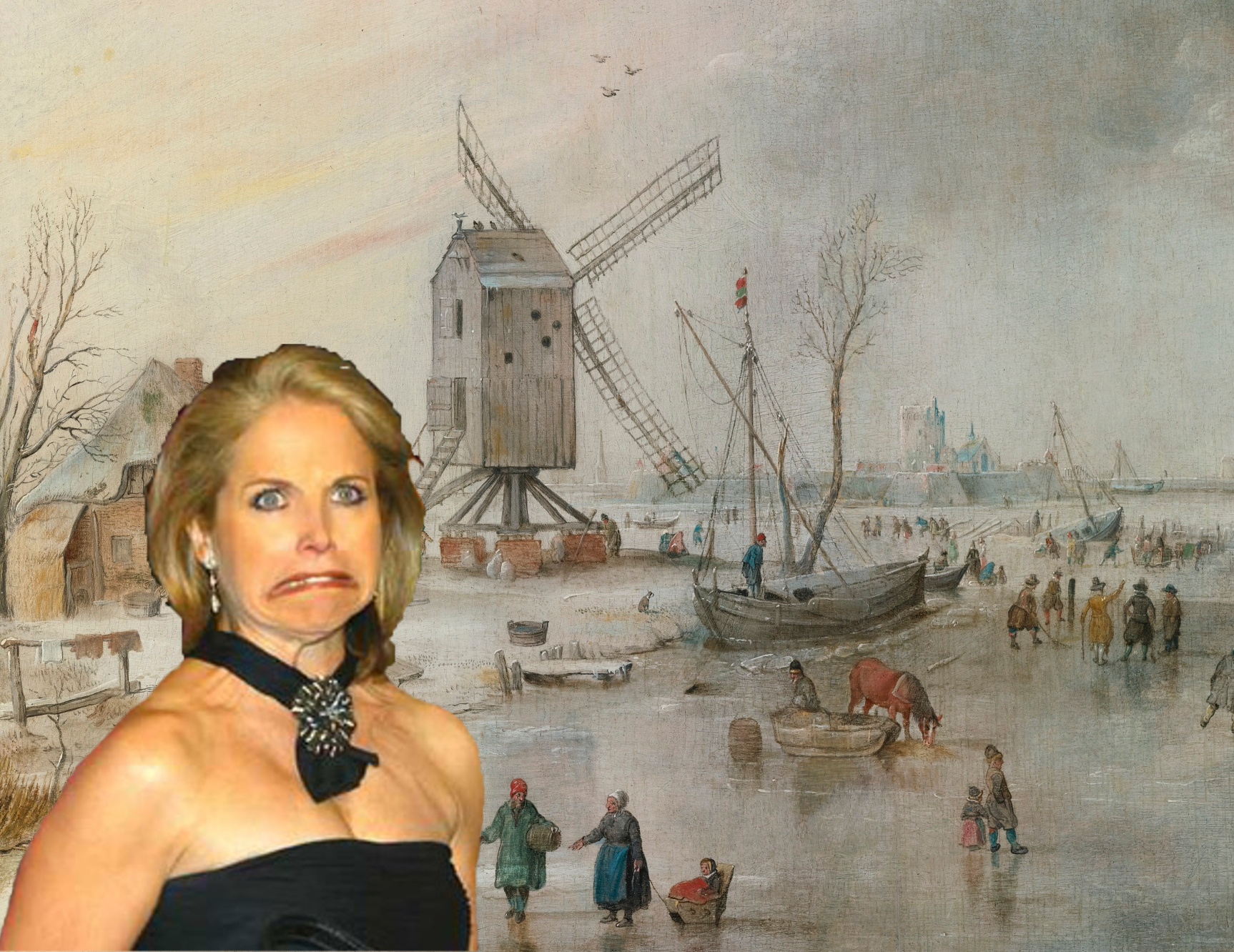 NBC analyst Joshua Cooper Ramo got into hot water over a dumb comment about Japan's long occupation of Korea. He said, “every Korean will tell you that Japan, as a cultural and technological and economic example, has been so important to their own transformation.”

The Korea Times led the backlash, explaining, “Tens of thousands of Koreans and non-Koreans alike have criticized Ramo and NBC Sports on their social media, urging them to correct this misinformation and apologize. ... During Japanese rule (1910-1945), many Koreans suffered enormously, often from rape, forced labor, torture and death.” NBC apologized and sent Ramo to an off-air "penalty box."

Then therre was the womens' skiing championship in which NBC announced the gold winner -- the entirely wrong winner.

There were plenty more, but most of us were watching Walker, Texas Ranger re-runs by then.

CNN Media said poor TV ratings for the '18 Games made NBC's $12 billion rights investment look risky. Ahiza Garcia wrote: "Viewership for the current Olympics on NBC is down 24% compared to Sochi among viewers aged 18-49, the age demographic most coveted by advertisers. (NBC notes that the demo is actually down only 15% when including viewers from both NBC and NBC Sports Network, which is airing prime time coverage of the Winter Games for the first time.) But even the Opening Ceremony, which is typically a major draw, was down 8.6% from four years ago." That confirms what I thought: a lot of you found better viewing choices than the Winter Olympics NBC-style.