The Bile Beneath Our Wings: Bette Midler’s Greatest Hits of 2018

Singer-actress Bette Midler can belt things out. Not just her schmaltzy show tunes, but her Greatest Hits: her fiery, unhinged hits on conservatives, Trump, and pretty much any person who is not a member of the show biz left. She’s usually uninformed, always strident and pretty hateful. Here are five hits that, in the past year, have led people (even liberals) to question her sanity, chide her on Twitter, or simply roll their eyes.

On Nov. 14, Midler tweeted out a picture from a Melania Trump photoshoot that appeared in GQ magazine circa 2000. The photograph shows Melania posing in an airplane cockpit, scantily clad in metal … things. While the display is quite odd, it takes a certain kind of vindictive mindset to resurrect an 18 year old photo to embarrass the First Lady, plus accompany it with text: “The dry cleaning bill for the upholstery on Air Force One must be insane. #FLOTITS.” The tweet rendered a lot of criticism from journalists on all sides, but it has not yet been deleted. 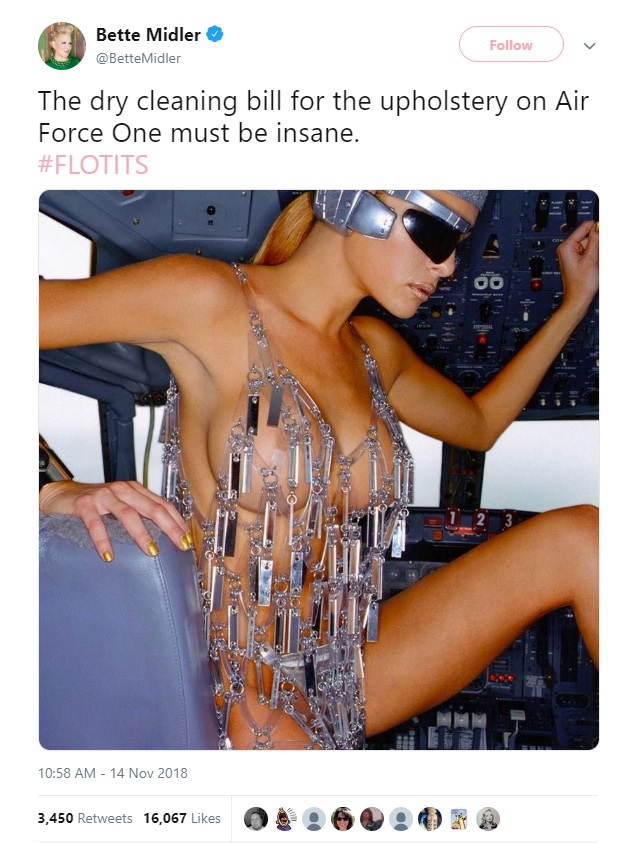 Reeling from the Brett Kavanaugh nomination drama and fully convinced of his guilt despite the lack of evidence, Midler let loose on Twitter on Oct. 4: “‘Women, are the n-word of the world.’ Raped, beaten, enslaved, married off...enduring the pain and danger of childbirth and life IN SILENCE for THOUSANDS of years...” According to the Washington Post, Midler was “paraphrasing the title of a 1972 song written by [John] Lennon and [Yoko] Ono” which bemoaned the treatment of women. Twitter, however, was not moved by the reference, and Midler was again taken to task for her blithe usage of racial language. The tweet was later deleted. 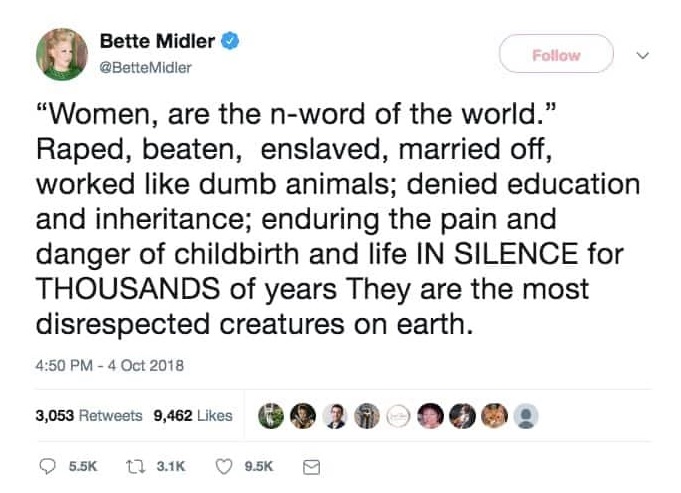 As MRC’s Gabriel Hays reported on June 20, Midler reacted to Trump’s “zero tolerance” border policy by parroting what most mainstream journalists had to say. Her tweet that day read: “‘What do you call a country that institutionalizes child’s [sic] abuse? Sadly, now we call this country The United States of America.’” Unsurprisingly, she had ignored America’s border problems until then. 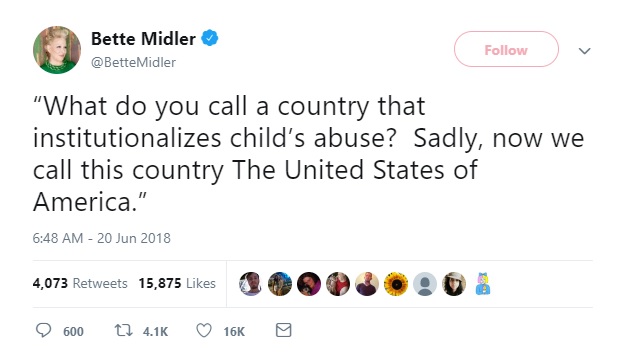 On June 6th, MRC’s Rachel Peterson caught Midler politicizing the anniversary of Bobby Kennedy’s death on Twitter: “Today we mark the 50th Anniversary of the death of Bobby Kennedy, BY A GUN. IF WE HAD ACTED TO CONTROL GUNS...WE WOULD NOT HAVE LOST THOUSANDS TO GUN VIOLENCE.” Impeccable logic. 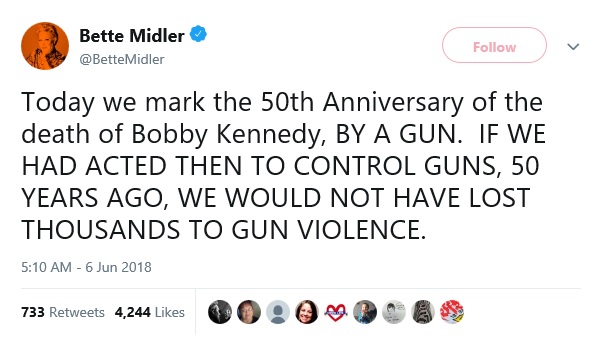 Following a July 26 performance of Hello Dolly at which the ex-presidential candidate was present, MRC’s Gabriel Hays wrote that Midler burst into adulation: “#HILLARYCLINTON CAME TO #“HELLODOLLY TONIGHT!!...The crowd stood, clapped and chanted her name until the lights went down. It made us all unbelievably happy to see her…” So, had people attended that night to see Midler or Clinton? We may never know. 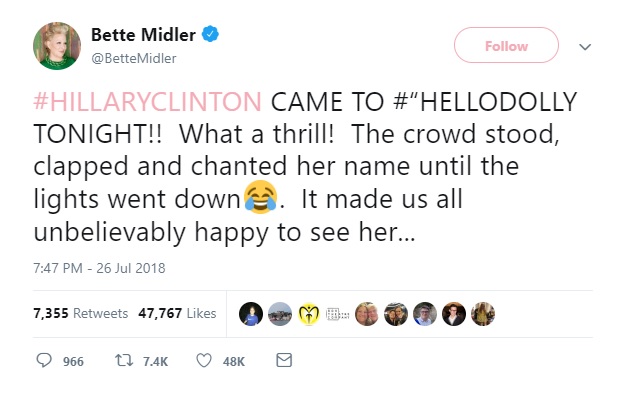