Legitimate satanism seems to be a growing trend in pop culture these days. As society seems to lose all moral footing, it’s no coincidence that musicians, influencers and mainstream shoe companies are embracing their infernal sides and selling it to kids. 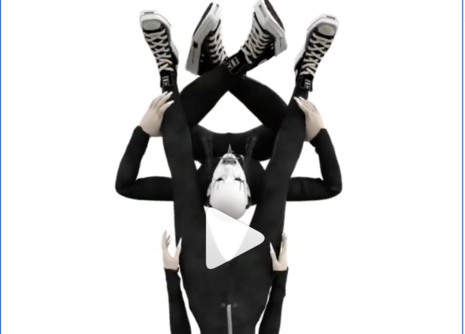 The latest promotion of Lucifer comes from classic footwear brand Converse. In an advertisement for its latest limited edition line of sneakers, the company thought using a pentagram – a classic symbol of witchcraft and devil worship – was a hip idea. Hey, pop star Lil Nas X had sex with the devil in a music video and it got hundreds of millions of views. Maybe this way Converse can sell millions of shoes … it just has to be ok with selling its soul to the devil.

Converse’s new line of Chuck Taylor shoes is a collaboration with Goth artist and fashion designer Rick Owens called “TURBODRK.” “TURBODRK” is just one part of Owen’s new “DRKSHDW” fashion collection which is all about “refashioning classic silhouettes with a heavy injection of glam-rock and grunge,” well, and the Devil himself.

Converse’s Instagram post about the collaboration featured a short video of two ghoulish models posing in all black jumpsuits, disturbing white masks that would make Michael Myers blush, and the new edgy Chuck Taylors. Though, the characters themselves weren’t the most disturbing aspect of the clip, it was how they were posing. Together, both models were arranged in such a way as to convey an obvious upside down pentagram.

So, yeah, how ‘bout that, kids? Get your pentagram shoes so you can look fresh as you join Lil Nas X on his stripper pole ride to hell.

Apparently, the inclusion of the pentagram isn’t just some edgy, scare-your-Christian-parents shtick. For Owens, who wrote the caption that went along with Converse’s Insta post, there’s an actual evil and subversive philosophy behind its use. He wrote, “I've been using this pentagram for a long time because obviously, it has adolescent occult associations… I like the fact that it refers to an alternative system.”

Oh, an “alternative system,” eh? He obviously means a system contrary to what many progressives consider to be an oppressive western civilization built on Christian repression and white supremacy.

Think about that in terms of the last year with Black Lives Matter riots, Critical Race Theory and all manner of anti-American talking points that came to a head. That ideology was all about undoing the white supremacist system. Throwing off the prevailing system seems to be all the rage right now, and some people like Owens and Converse are flirting with the satanic nature of this revolution.

It got even worse. Owens added that the pentagram “suggests openness and empathy. It suggests the pursuit of pleasure, this pursuit of sensation … So that leads us to be more accepting and tolerant of other systems, which I think is a good thing.” Oh, right. We are witnessing this kind of "tolerance" creep into our society, aren’t we? It preaches that Christians and conservatives must let go of their morals for the sake of not offending others, but then ultimately becomes intolerant of Christian views and drives them out of society.

And, of course, isn’t that exactly what Satan wants? It’s quite telling that these people are associating the pentagram with goodness and social justice. Take note!