Though it seems like everything to do with the NBA is drenched in social justice, pro-BLM BS – not to mention valuing its Chinese clientele over its home citizens – one head coach proved that not every aspect of the league is infested with woke garbage. 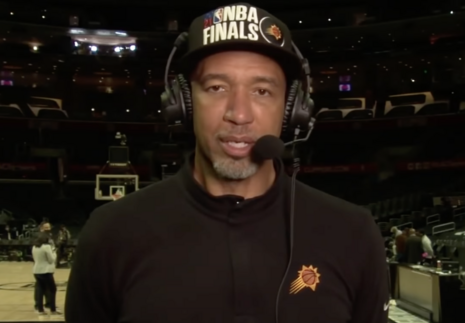 Christian outlet Faithwire reported on Friday how Phoenix Suns head coach Monty Williams took an opportunity to show gratitude for his team’s achievements this season, rather than spout off about some self-righteous political grievance he had.

Like Greg Popovich or Steve Kerr – two NBA coaches with far left axes to grind – Williams could have raised a fist in support of Black Lives Matter, railed against Donald Trump or ignored China’s human rights abuses. Instead, he decided to give the glory to Jesus Christ.

During an interview with ESPN’s SportsCenter, Williams told host Scott Van Pelt about what his team being in the NBA Finals means to him. The Phoenix Suns haven’t been to a league final since 1993, so, of course, it was a momentous occasion. If there were any moment to thank and honor God, this would be it, and Williams delivered.

Van Pelt asked Williams, “How have you found the sweet spot, of being all of the things a man wants to be – a mentor, a leader, and a task master when you have to be. How has that balance been achieved?”

The successful coach provided the most refreshing answer you could ever hear on cable television. “The essence of my coaching is to serve,” he said, adding, “As a believer in Christ, that’s what I’m here for.”

Now, that’s what it’s all about. Giving due credit to the Son of God and giving witness to His example of humble service in front of a large TV audience.

Williams continued, talking about how he keeps his team inspired to reach the heights they’ve reached. “And I tell them all the time, if I get on you, I’m not calling you out, I’m calling you up. You have potential, and I have to work my tail off to help you reach that potential.”

The Suns coach mentioned that his team has certainly responded well to that message. “Guys have embraced that,” he said, adding, “They understand, if I’m direct or black and white with them, it’s not to make them feel bad. I want them to get paid, I want them to win, I want their families to enjoy it.”

And. again, from a league that lately seems to harp on political grievances, or hype up racial resentment (just think of all the whining LeBron James has done in the realm of identity politics), the attitude of humble perseverance and gratitude showcased by Williams is so welcome.

Williams’ thoughtful perspective on life and achievement, and his faith in God, has been a great source of strength throughout his life, especially in hard times. As Faithwire noted, in 2016 Williams’ wife was killed in a car accident and despite the fact that her death was the other driver’s fault (they were on drugs during the crash), he claimed at the time that he had “no ill will” towards the driver. He also mentioned that he couldn’t call himself a follower of Christ if he didn’t embrace that spirit of forgiveness.

We wish Williams and the Phoenix Suns all the best in the NBA Finals.