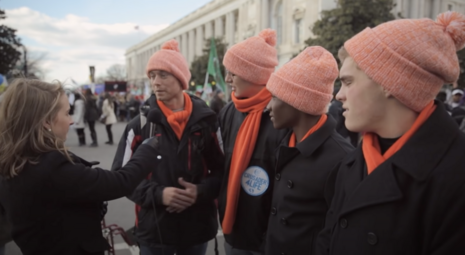 The radical left and the media say it’s not a man’s business what a woman can do as far as aborting his son or daughter. Thankfully pro-life men are pushing back on this sexist excuse for baby killing, organizing a men’s only march for life.

LifeSiteNews reported on the this brand new nationwide day of peaceful protest called the “National Men’s March” which is being organized to “defend the least of these and call for the end of the government sanctioned daily mass murder of abortion.”

The Men’s March was created by Father Stephen Imbarrato and Catholic radio host Jim Havens. Imbarrato – a Catholic priest who has turned to pro-life ministry after his former life in which he had aborted children with his then-girlfriend – described the spiritual character of the march. “All men are called to spiritual fatherhood … not all [are] called to become priests, but to be ‘fatherly,’” he said, adding, “They are called “to be protectors of women, to be protectors of children, to be mentors, to be wise men.”

The pro-life priest told LifeSiteNews that the march will be held on June 12 in DC, much like the annual March for Life. The march is set to start at 11 AM with gentlemen gathering at the Washington Surgi-Clinic, a late-term abortion center. The group will begin with prayer and then march the “five to seven blocks to the White House” which Imbarrato described as the place where “an apostate Catholic lives.”

Of course Imbarrato was referring to President Joe Biden, a man the media praises as a “devout Catholic” even he proudly flouts Church teaching on abortion. In addition to his numerous pro-abort executive actions as president Biden has agreed to “codify” Roe v. Wade, a move that would make abortion protected by federal law in the U.S.

The National Men’s March is meant to show men’s solidarity with the most defenseless people on earth, a direct rebuke of the male leadership in the White House. True leaders protect unborn children, not legislate their dismemberment.

“We want to draw attention that we are not going to tolerate the daily mass murder: government protected, government sanctioned, government funded of pre-born children,” Imbarrato added.

March organizers also specified that there is a dress code for the Men’s March. All non-priestly participants are asked to wear suits. Also, there will only be one banner present. No other signage is to be allowed.

Imbarrato mentioned his hopes that the Men’s March will be a “seed” of inspiration for the rest of the world, especially for men who need to embrace their fatherly responsibilities. He stated, “men should be the spiritual head of the household – men should take the lead in the spiritual life of a particular area.”

Though men’s march organizers may need to strategize ways on getting their message through the anti-life media blockade. The media does its best to ignore the annual March for Life and its hundred of thousands of pro-life demonstrators every year. The last physically-attended March for Life in 2020 featured President Trump as a guest speaker – the first time a U.S. president has ever spoken there – and major TV networks only gave the event 28 seconds of coverage.