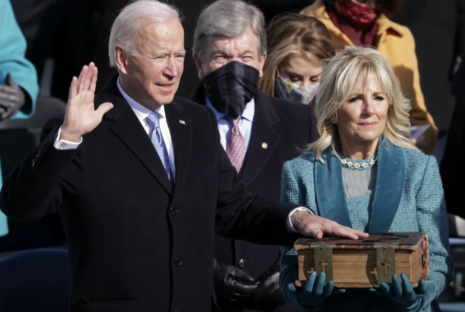 It’s sad to say, the presidential geezer showed more piety when he referred to God as “you know, the thing.”

Conservative outlet The Western Journal pointed out the glaring omission of the word “God” from Biden’s strangely secular proclamation and confirmed that Biden, like the rest of the Democrats embracing the spirit of the age, focused rather on making references to “racial justice” and vague appeals to “faith” and “prayer.” Oh, that’s lovely. Take God out of schools and now out of prayer. Well, of course! We have to replace Him with the left’s new social justice religion. This is all so swell.

NewsBusters did a simple search through Biden’s religiously sterile “A Proclamation on National Day Of Prayer” speech from May 5, and did in fact confirm that the word “God” was not found once in the whole speech. Neither was “Jesus,” nor “Bible.” The most explicit remark Biden seemed to make related to God was, “Because human beings are the most dynamic link to the divine on this planet.” Mmmhmm. Though, how does that really communicate our unique belief as a Christian nation?

After all, even those bloodthirsty Aztecs believed humans had a connection to the divine, one sustained by gifts of cut out, still-beating hearts, that is.

As the outlet reported, there were mentions of “racial justice,” “racial injustice,” “diversity” and even “climate change.” Biden mentioned a quote from the late Representative John Lewis (D-GA), but couldn’t even bother putting in a Bible verse or mentioning anything to do with any of the Old or New Testament figures. It was fluff. Complete sentimental BS, and all this from our media-esteemed “Second Catholic president.” What a joke!

Of course, several Christian conservatives were quick to point out Biden’s offensive omission on social media.

Conservative Christian radio host Todd Starnes slammed the speech, pointing out its lack of God, and the deep irony Democrats don’t believe in God, but in government:

Regarding Biden's godless National Day of Prayer proclamation: The problem with the Democrats is that they don’t believe that we are endowed by our Creator with certain unalienable rights. They believe we are endowed by the government.

Joe Biden’s National Day of Prayer Proclamation has been released and it doesn’t even mention God once! How do you release a proclamation about prayer and not mention God at all? Of course it mentions climate change & racial justice. Truly, this is pathetic...and not surprising! pic.twitter.com/czOQx3ioHj

Who is he praying to?? The BLM gods?

Honestly, one does wonder.

Either way, the fact that the leaders of our “nation under God” have refused to recognize Him is shameful, especially during a time when we need Him most. What on earth is “Catholic” Joe Biden doing?