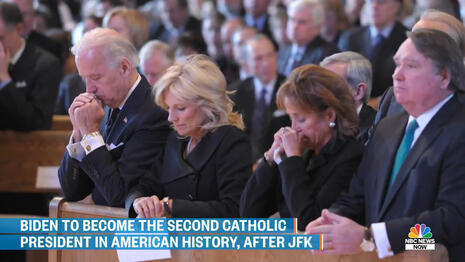 President Biden is a “devout Catholic,” the liberal media say. But there’s consternation among some U.S. Catholic leaders about how Biden’s policies directly contradict Church teachings. As columnist Cal Thomas asked elsewhere on this site, “How can one be devout about one’s faith and not comport with Scripture and the teachings of the Catholic Church?”

First, the media sales pitch. You’ve heard it over and over again: CNN’s Wolf Blitzer on the morning of Biden’s inauguration: “He is, as we keep pointing out, a religious man, a man of deep faith.”

That echoed correspondent Gloria Borger asserting back in September that “he’s a very devout Catholic....it’s been inculcated in him since he was a young kid.”

On NBC in August, Nightly News anchor Lester Holt made it seem like his job title, referring to “devout Catholic Joe Biden.” That same evening, ABC News correspondent Mary Bruce also championed Biden, then under fire from President Trump, as “a devout Catholic” — as if it were an undisputed fact.

Not to be outdone, CNN’s Dana Bash proclaimed later that night on Cuomo PrimeTime: “He has a very, very deep faith....He’s a very staunch Catholic. Has been his whole life.” There's a lot more where that came from. Watch:

The same liberal media that celebrated Biden as “devout” also cheered when he was endorsed last spring by the advocacy arm of the nation’s top abortion provider, Planned Parenthood. But they haven’t acknowledged how at least one retired archbishop believes Biden is so at odds with the Church, he “should not receive communion.”

Now that he’s President, Biden has done nothing to alleviate these concerns:

■ On the day he was sworn into office, the President of the U.S. Conference of Catholic Bishops denounced his anti-Catholic positions. Via CNSNews.com:

Although the liberal media describe President Joe Biden (D) as a “devout Catholic,” the U.S. Conference of Catholic Bishops (USCCB) is very familiar with his pro-abortion, pro-LGBT agenda and says Biden supports policies “that would advance moral evils and threaten human life and dignity....”

In a statement released on Jan. 20, USCCB President Archbishop Jose Gomez of Los Angeles, said, “[A]s pastors, the nation’s bishops are given the duty of proclaiming the Gospel in all its truth and power, in season and out of season, even when that teaching is inconvenient or when the Gospel’s truths run contrary to the directions of the wider society and culture.”

■ The President’s pro-abortion policies and rhetoric are at completely at odds with Catholic doctrine. As the Catholic News Agency documented, U.S. bishops have lamented Biden’s handling of the issue:

“We strongly urge the president to reject abortion and promote life-affirming aid to women and communities in need,” the U.S. bishops’ Committee on Pro-Life Activities head Archbishop Joseph Naumann of Kansas City in Kansas said Jan. 22.

“It is deeply disturbing and tragic that any president would praise and commit to codifying a Supreme Court ruling that denies unborn children their most basic human and civil right, the right to life under the euphemistic disguise of a health service,” he said.

■ Biden is also on the wrong side of the Catholic Church when it comes to issues of sexual identity. From FoxNews.com:

Wednesday’s order, they said, “threatens to infringe the rights of people who recognize the truth of sexual difference or who uphold the institution of lifelong marriage between one man and one woman. This may manifest in mandates that, for example, erode health care conscience rights or needed and time-honored sex-specific spaces and activities.” 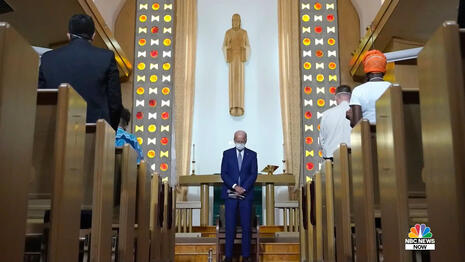 On January 25, NBC’s Sunday Today uniquely raised the question of whether Biden’s professions of faith “line up with his policy proposals.”

The report by correspondent Anne Thompson actually permitted this observation from Catholic Association Senior Fellow Ashley McGuire: “If there’s an area where Catholics are most confused, it’s how can you be somebody who’s so ardently promoting your Catholicity while at the same time adopting views that are so extremely divergent from where your Church is on the issue?”

But Thompson chose to give Biden credit for pushing Catholic doctrine when it matched the liberal agenda: “You see the impact of Catholic social doctrine on his policies regarding immigration, social justice, and the death penalty.”

At least NBC showed some awareness that there’s a disconnect between President Joe Biden and “devout Catholic Joe Biden.” Unfortunately, more than a week later, none of the other liberal networks have even bothered to acknowledge this apparent contradiction.