With all this push for Hollywood “diversity” one often wonders if Hollywood has a vendetta against traditional standards of movie making. According to one insider, that’s exactly the case for at least one major studio. Sci-fi author Nick Cole, co-author of the Galaxy’s Edge series, claimed that during a pitch meeting, a major Hollywood studio passed on a recent project he had been working on, citing the fact that they’re done producing content for “White, Christian, Trash.”

Oh wow, that’s a hell of a way to say it. Perhaps this is the sentiment underlying Hollywood’s spate of inclusivity-over-everything pledges they’ve made in the past few years.

In fact Cole said as much, revealing his insider knowledge in response to a report on a recent Hollywood film studio panel, during which Walt Disney Television Chairman of Entertainment Dana Walden talked about TV projects it had passed on for not being “inclusive” enough.

Walden prompted the discussion by mentioning ABC’s “inclusion standards” that were rolled by the company last September. Pop culture outlet Bounding Into Comics listed several of these standards which ABC content would need to strive to fulfill: “50% or more of regular and recurring written characters come from Underrrepresented Groups;” “50% or more of regular and recurring actors come from Underrepresented Groups;” “Secondary Characters: Meaningful inclusion of Underrepresented Group as secondary or more minor on-screen individuals, including background characters.”

During the panel, Walden expressed that Disney had passed on several projects which did not fulfill these inclusion criteria. The Hollywood Reporter reported on one in particular Disney passed on. “Walden cited an example of receiving a script centered on a white family with the assumption that the diversity would come with the neighbors,” the outlet wrote. Walden declared that that film did not qualify. “Pass. That’s not going to get on the air anymore because that’s not what our audience wants. That’s not a reflection of our audience, and I feel good about the direction we’re moving,” she said. 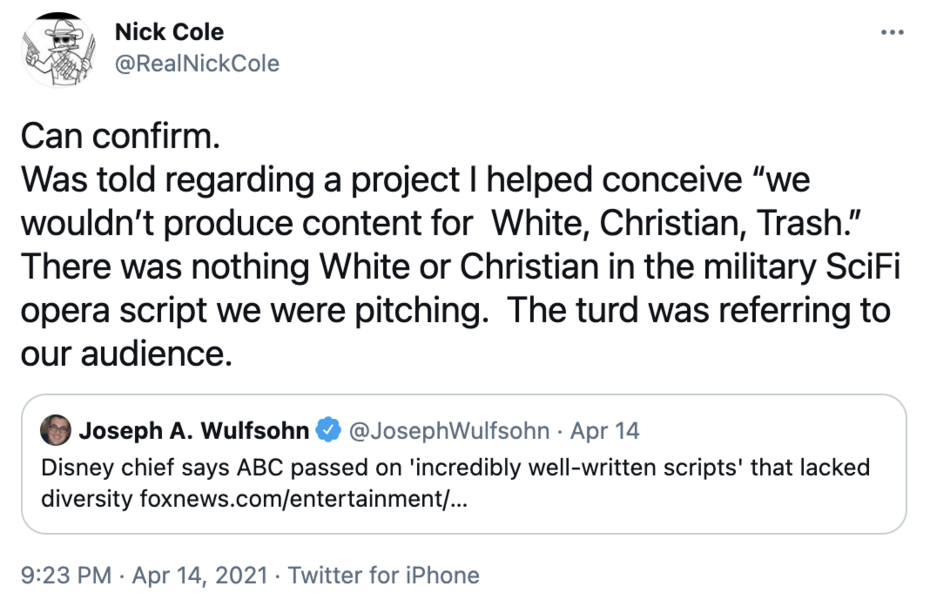 Cole also wrote, “Hollywood is a place filled with the worst people who somehow think they hold the moral high-ground about what gets made while raping girls and molesting small children.” Well that’s quite the indictment. At the very least there is a lot of immorality in Hollywood. Think of Weinstein, Woody Allen, and all the immoral anti-Christian perversion shown in films these days.

What gives them the right to call traditional moviegoers trash?