Looks like TBS late night talk show host Conan O’Brien is fitting mockery of Jesus Christ and President Trump into the same joke and not everyone thinks it’s hilarious. 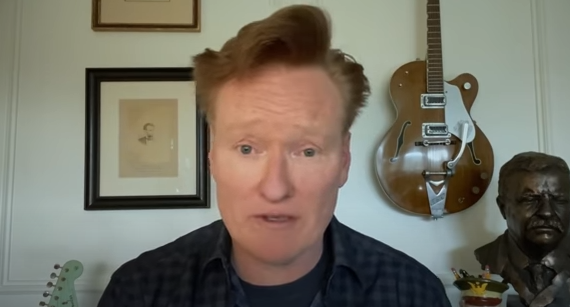 O’Brien, the comedian and former Tonight Show host, decided a snarky tweet about the crucifixion and pandemic-fighting drugs praised by Trump officials was the best way to ring in the Easter holiday. Yeah, why not take advantage of a global tragedy and the holiest day of the year to trigger a whole bunch of right-wingers? What a nice guy.

Now, that tweet’s got everything: making fun of Trump as a shameless used car salesman? Check. Hitting Trump on using Christianity for his own political power? Check. Making fun of a coronavirus treatment just because Trump’s pushed it? Yep, that too.

And of course, there’s the classic treatment of Jesus’ sacrifice as the premise for a lame joke. And these folks lecture us on decency?

Conan posted the joke for his 28.6 million Twitter followers, and it has since received over 100,000 likes and 14 thousand retweets. Though not everyone approved of anti-Christian/anti-Trump snark. TPUSA’s Graham Allen responded to the post, writing, “Jesus is NOT the butt end of your crap joke...He is the SON OF GOD! Show some respect!”

Twitter personality and conservative commentator Terence K. Williams tweeted, “Some People in Hollywood make me sick! How dare you make jokes about Jesus being crucified. These people hate Jesus and President Trump so much.”

The Blaze’s Jessica Fletcher tweeted, “What is wrong with you[?]”

A couple users also urged the TBS host to show some courage and make the joke about other religious figures. Canadian psychologist Gad Saad tweeted, “Now do Muhammad. Show us your courage, castrato. [I’ll also retweet.]”

Trump-supporting actor James Woods pointed out this double standard as well, and insinuated that the only reason Conan is brave enough to snark at Christians is that we tend to forgive more than other religious groups. “I remember when comedians in Paris mocked the Muslim faith. Thank God we Catholics just turn the other cheek,” the actor quipped.

Well, he’s probably right. Though we will let Conan take his best shot at Ramadan in the next couple of weeks, unless he’s chicken.