Comedy Central’s Sam Bee’s got to get her digs in on Trump’s legal team, but is she really that stupid that she’s going to slime them all as sexual predators when she herself is such a big fan of predator-enabler Hillary Clinton? 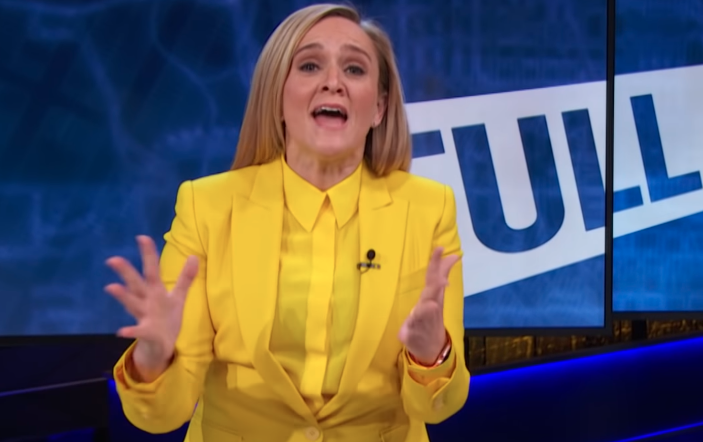 The unhinged host of Comedy Central’s Full Frontal with Samantha Bee on Wednesday added her own “comedic” lines to the Senate impeachment trial. Of course, none of her jokes provided any substantial counterarguments or clever points to the actual trial at hand; she just kind of called them rape-enablers.

Ms. Bee, whose comedic resume includes calling Ivanka a “feckless c*nt,” went after Rep. Jim Jordan (R-OH) for claiming that Senate Republicans not calling witnesses during the trial was the “right thing to do.” Of course, Bee tried to point out the hypocrisy of a Republican man talking about right or wrong and tee’d up the talking point of Jordan allegedly knowing “about sexual abuse at Ohio State and saying nothing.”

As Yahoo! News pointed out, this was just a taste of Bee’s hypocritical attack on Trump’s entire defense team. She claimed, “Continuing his tradition of appointing only the best, Trump’s defenders include Ken Starr, Alan Dershowitz and Jim Jordan,” she said, adding, “It’s a virtual dream team of rape culture.”

Bee had plenty of rape-centric zingers left for these high-profile members of the patriarchy. She referred to Ken Starr and his tenure as president of Baylor University. Referencing the New York Times report that Starr didn’t do enough to expose sexual assault at the university, Bee claimed, “Just to be clear, when Jesus said to ‘turn the other cheek,’ he didn’t mean away from people getting assaulted.”

Yeah, she was serving it up.

Bee then went after Harvard Law professor Alan Dershowitz’s friendship with billionaire and alleged suicide victim Jeffrey Epstein, saying, “In Dershowitz’s defense, it’s not like he was close friends with notorious pedophile and didn’t-kill-himself-er Jeffrey Epstein. Oh no, I’m sorry, he totally was.” Boom, roasted, right?

Bee summed it all up saying, “It is infuriating that these three men are allowed to show their faces in polite society, much less defend the captain of the rape culture all-star team.”

Good on her. But isn’t the source of much of her rage the fact that Trump beat her own preferred rapist protector in the 2016 election? I mean, regardless of any of these men’s charges, Samantha’s Hillary Clinton support shows that she supports the same kind of person.

Clinton didn’t fire her 2008 campaign adviser Burns Strider after he sexually harassed a staffer multiple times. The victim was moved to a new job. Strider even got hired to help with the 2016 Clinton campaign. Do we also have to mention the allegations that she knowingly covered for the predatory behavior of her own husband, Bill?