World leader and queen of the mean girls, Justin Trudeau has got lefty tongues wagging over video of his alleged gossip about President Donald J. Trump during this week’s NATO summit. And even though Trudeau is an effete, blackface-wearing hypocrite, celebrity twitter heralded his behind-the-back antics as some heroic Trump takedown. Of course this is the pettiest news of the year, but then again, this is both Canada and Hollywood we’re talking about. 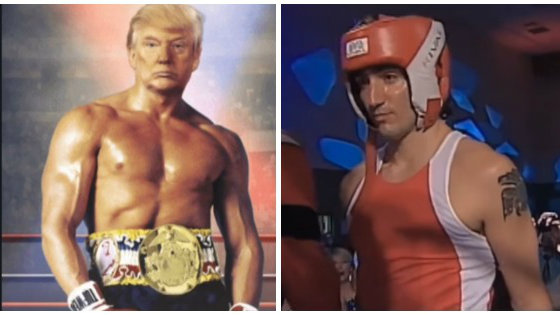 Comedian Sarah Silverman pondered whether Donald Trump would ever take such rumor-mongering and backbiting to heart. She tweeted, “What concerns me is that Trump sees this video and the deep shame he feels from it won’t be internalized- it will just convert into outward rage & blame bc he can’t self reflect.” Without a TV show, Silverman has apparently turned to dimestore psychoanalysis for a living.

Silverman added, “The shame has to turn into something else, in a direction his sense of survival can handle: outward.” Like, say, conquer Canada? Then the Danes would have to give up Greenland!

Takei also tweeted, “World leaders scoffing at Donald is nothing new. Thanks to him, we are the laughing stock of the world.” Oh because previous presidents allowing NATO allies to shirk paying the defense budget was upstanding?

Michael Moore loved to see the petty garbage between the world leaders. He tweeted a photo of an old boxing match between the Canadian PM and Conservative Canadian Senator Patrick Brazeau, that Trudeau won, captioning it with, “The last time someone called Justin Trudeau a name (Trump called him ‘two-faced’ today), this is what happened.” Sure, Mike. Dude can’t even tell Trump what he thinks to his face, while Trump says it on camera to the world.

Perennially pissed off Westworld actor Jeffrey Wright lapped up the drama as well. Tweeting news about the president calling Trudeau “two-faced” and then leaving the NATO summit early, Wright commented, “Ol’ boy’s tucking tail and slinking home now? Puppy piss. He coulda stayed here, humiliated himself in front of Congress and saved taxpayers the money and the additional international embarrassment.”

Right. And to think, these people are always so preoccupied with Trump’s lack of decency, but take the side of a blackface-wearing, radical left-wing priss who can’t pay the measly 2% GNP that’s his NATO commitment, and who gossips when he’s called out for it. WEAK.