So Serious: NBCNews.com Swoons Over Drag Queen At Impeachment Hearings 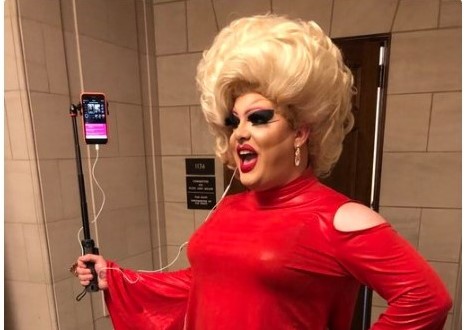 If you want a concise distillation of how serious the left’s impeachment attempts are on this first official day of hearings, look at the Drag Queen journalists on the ground at Capitol Hill. Just try to tell yourself — without wincing — that this is a “sad” and oh-so-serious day for democracy, as Nancy Pelosi puts it.

It sure says a lot about the Democratic party when drag queens have become their shock troopers.

Pissi Myles, as he likes to call himself (please Lord, we hope that doesn’t mean what we think it means), apparently fancies himself a journalist with a valid interest in covering impeachment politics. It’s a nice reminder of just how much of a circus the Dems’ attempt at removing Trump is, with freaks like Pissi Myles being the enthusiastic rent-a-clowns.

NBCNews.com reported on the attendance of “the award-winning drag performer,” composing a headline that would have made the founding fathers seriously contemplate abandoning their American experiment. Read it and weep: “Drag Queen Sashays into Trump Impeachment Hearing.”

Yes, it seems to be quite the spectacle. The site described his appearance, writing, “Spotted towering over the gray and blue suits packed into the first day of President Donald Trump’s impeachment hearing was an enormous blond wig — that of Pissi Myles, a drag performer from Asbury Park, New Jersey.

The accompanying images were about as horrifying as one could imagine. Pissi, a clearly overweight male, was wearing an offensively red, way-too-short dress, sparkly red heels, and a curly blonde wig so ostentatious that Honey Boo Boo would have fainted on sight.

The most outlandish part of it all was that Miss Myles had her reporting rig all set up and ready to go. She was holding her phone with an extension arm, had her headphones in, and was giving viewers an up close and personal account of the morning’s proceedings.

NBCNews asked Miles how his day was going, to which he replied in classic camp fashion, “It’s a crazy day in Washington! I’m flipping my wig over the high-energy proceedings today.” Hmm, wow. Though Pissi was comically aware of the spectacle he generated, adding, “Tensions are high, and the bar for who’s allowed in the Longworth House is very, very low.”

You can say that again.

The outlet obtained a bio about the Drag queen, stating that he “is an award-winning drag performer, comedy producer and winner of Philly Drag Wars and Miss Fish NYC who performs regularly in the New York area.” Myles’s Husband, David Ayllon told the site that the artist is covering the hearing via a new social media “startup app” called Happs.

It’s a shame to even say it, but If Schiff and his drag queen soldiers beat Trump, then maybe he doesn’t deserve to win.