The Horror: Alyssa Milano to Peddle Lefty Books to Kids 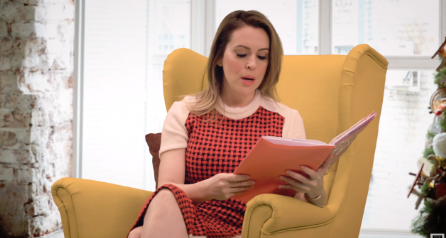 Unfortunately, actress Alyssa Milano is back in the news again … again, and this time her activism seems to have taken on a new more insidious form. Parents be warned, the #metoo champion and physical embodiment of Brett Kavanaugh hatred has just signed a deal for a new line of children’s books that promote a healthy dose of progressive activism.

On Thursday, Entertainment Weekly reported that “Milano has signed a major book deal with Scholastic to a series entitled Hope, with the first volume slated for an October 1, 2019 release.” The book, which is illustrated by Eric S. Keyes, follows the adventures of young female protagonist Hope, who “seeks to create social change in her community.”

Calling her new series “empowering” (Gosh we get it, already,) Milano stated that it’s important for the sake of kids discovering that their “voice matters.” “I’m so excited about my new character, Hope Roberts,” she said. “She believes in dreaming big. She’s brave and strong and confident in her abilities — but she’s also a girl just trying to survive middle school.”

Hope’s here to help youngsters understand that they can be all they can be, like top of their class, captain of the JV cheer squad, and still have time to go down to the Supreme Court for their annual exercise in liberal group scream therapy.

Milano added, “I’m thrilled to be working with Scholastic on this empowering book series and I can’t wait for everyone to meet Hope.”

This isn’t the first time Alyssa has dabbled with the power of children’s literature for the sake of lefty politics. A week ago, the Charmed star posted video to social media of her reading a satirical book that attacked Secretary of Education Betsy DeVos. In a Dr. Seuss-style rhyme the actress butchered DeVos’ proposed changes to Title IX regulations.

It came as a great joy to Scholastic when the company found out that Milano was interested in making actual children’s books. Vice President and Publisher for Global Licensing, Brands and Media of Scholastic, Debra Dorfman stated, “I’ve been a huge fan of Alyssa Milano’s for years and I was so excited from the very moment she shared her idea and vision for Hope — a series centered around a smart and passionate character who is ready to conquer the world.”

Dorfman added that “Alyssa is such a positive role model and I admire how she uses her voice and her platform to help those in need around the world, especially children.” Well Dorfman is clearly from another planet, because it doesn’t seem that any sensible parent would want to open their kids up to lefty programming, especially from somebody who embodies the worst hysterics of the #metoo movement.