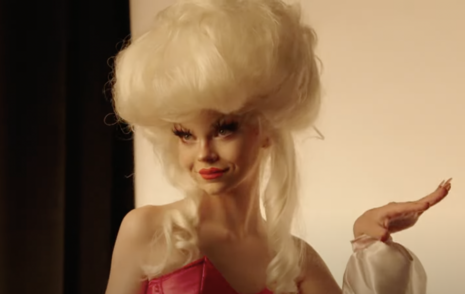 With disturbing regularity, massive entertainment conglomerates are targeting minors with the latest fads of Gay, Inc.

On Tuesday, Discovery+ tweeted the trailer for Generation Drag, a new series about underage drag queens from executive producer Tyra Banks. The docuseries hits the streaming service on June 1 in honor of Pride Month.

The trailer is painful to watch as minors prepare for Dragutante, a drag show for kids held in Denver, Colorado. According to Dragutante's website, the show is for "Teen queens, kings & non-binary performers ages 8-18."

(Warning: The following trailer is disturbing.):

Feeling fierce and free! 🌈 In a new series from executive producer Tyra Banks, teens and their families share stories of expression and acceptance. #GenerationDrag drops June 1 on #discoveryplus. pic.twitter.com/8o3CAsbbbW

From the over-sexualized and hyper-feminized boys to the artificially airy "girl" voice of the trans-teen, the vulnerable youth in this series come across as tragic. Yet Discovery+ wants audiences to believe their stories are a celebration of "expression and acceptance."

The ratio Discovery+ received after it tweeted the trailer proves there are still sane adults in the world.

"Cue the cancelling of Discovery+. Why? Why do we need to groom kids? What is everyone’s fascination with sexualizing kids #pedos," wrote one commenter.

"This is shameful," posted another.

Generation Drag's executive producer, former supermodel Tyra Banks, has been under fire lately for the treatment of contestants on her long-running reality show, America's Next Top Model. Accusations include unsafe conditions and models being refused medical treatment. Contestants called the experience "psychological warfare."

With Generation Drag, Banks has apparently decided to move onto a different kind of psychological warfare, one that encourages gender confusion and over-sexualization of children and adolescents. Sadly, she won't be criticized in legacy entertainment media for this abuse as the establishment is all in on the grooming agenda highlighted in the new series.

Prepare for more LGBTQUIA messaging like this to push boundaries with minors as the month of June approaches. As Gay Inc. becomes more aggressive, Pride Month is increasingly targeting younger demographics with inappropriate sexual and gender identity messages while also bullying adults who wish to protect children.