Cereal Killer: Kellogg’s Teams Up With GLAAD for LGBTQ Breakfast 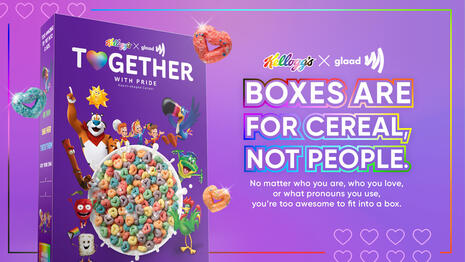 It's that time of year again - time for corporations to rainbow-up and start pandering to the LGBTQABCDEFG crew for “Pride Month” in June!

This year, Kellogg’s is partnering with GLAAD for a new “Together With Pride” cereal, which has already hit stores. This is an update from past gay cereal campaigns, which were only offered online. Now can you get woke messaging in your face in the grocery aisle!

The cereal is described as “berry-flavored, rainbow hearts dusted with edible glitter.” Gotta admit, that’s the gayest cereal I’ve ever heard of - way to play to stereotypes!

The box has all your favorite Kellogg’s cereal characters rallying around the bowl, including Tony the Tiger, Toucan Sam, and Snap, Crackle and Pop. A little Frosted Mini Wheat is pictured holding a rainbow flag with a triangle on it, which I had to look up. Apparently, the rainbow flag alone was not inclusive enough and they had to add elements “to represent marginalised LGBT communities of colour” and transgenders.

The side of the box lists the normal pronouns and then encourages eaters to “add your own.” (For those wondering, my pronouns are princess/goddess and if you don’t use them it’s a hate crime.)

Speaking of the box, the campaign has come up with the exceptionally lame tagline “Boxes Are for Cereal, Not For People.” A ridiculous tagline for a ridiculous cause. They seem oddly proud of it:

"Boxes are for cereal, not people" is the embodiment and celebration of Kellogg Company's commitment to diversity, equity and inclusion, not just within Kellogg Company, but also at the tables of our cereal fans coast to coast. As Kellogg has grown its multiyear allyship with GLAAD, the company hopes to spread the word on allyship and show its support for the transgender and gender nonconforming communities.

They’re even trying to do a #BoxesAreForCerealChallenge promotion for which Kellogg’s will donate “up to $140,000) to support GLAAD's efforts in accelerating acceptance and advancing equality for the LGBTQ+ community.” I’d say the acceleration efforts are going very well. Not a moment of the day, from breakfast to bedtime, is allowed to go by without societal celebration of the specific kind of sex some people like or the gender they feel they are.

Of course, the fact that colorful, sugary cereals are usually marketed to and eaten by kids is all part of the agenda and GLAAD admits they’re targeting the youth.

"Kellogg's new Together With Pride cereal will create opportunities for homes and families to have conversations about the importance of acceptance, compassion and understanding, especially when it comes to LGBTQ+ youth," said GLAAD President & CEO Sarah Kate Ellis. "Kellogg is not only building on an ongoing commitment to support the LGBTQ+ community, but initiatives that spotlight the importance of using correct pronouns to create safe and welcoming spaces for trans and nonbinary people."

Yeah, that’s what everyone wants in their breakfast – cereal with a side of social justice activism. Just another way they force feed their propaganda down people’s throats.

Conservatives Fight Back: Contact Kellogg's and let them know how you feel about their new LGBTQ cereal!