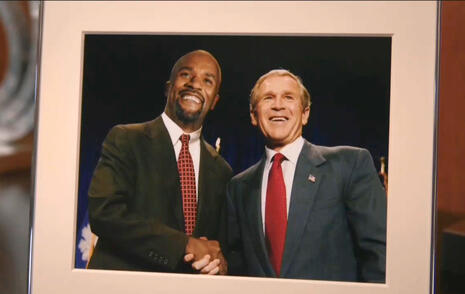 NBC premiered its new series about a group of black friends in Los Angeles, Grand Crew, with a pilot episode that has a character fretting about dating a -- gasp! -- "black Republican."

In the pilot on Tuesday, December 14, Nicky (Nicole Byer) goes out on a date with a handsome black man named Davis (LaMonica Garrett). She is attracted to him but becomes concerned after he makes a sarcastic comment about Obama's failed economic recovery.

She talks about her concerns with her friends at a local wine bar:

Nicky: Okay, so my date with Davis went really well. He's got a sexy mind and body and smells like fresh lavender. But at one point in the night, he did say, "Thanks, Obama."

Nicky: It was sarcastic. Like, "Thanks, Obama." Made me wonder if he was, like, a Black Republican. But they're not out here in the streets like that, right?

Wyatt: So what are you gonna do?

Nicky: I suppose the only way to figure out what he meant is to see him again and have sex with him. Ow! Thanks, Obama.

When Nicky goes out with Davis again, she sees books by Ben Carson, a photo of him with President George W. Bush, and other Republican paraphernalia in his home and is freaked out:

Nicky: Oh, you are so good at that.

Davis: What is it? What happened?

Nicky: I'm sorry. Are you a Republican?

Davis: Well, yeah. Is that a problem?

Nicky: But you seem so normal.

Nicky: Yeah? You're right. We shouldn't let politics get in the middle of this. You know, with you being so open-minded and all.

Well, Davis dodged a bullet. He is lucky to avoid getting involved with a woman who refers to killing unborn children as "reproductive rights." Davis can do better.

As the Democrat Party is increasingly seen as anti-men, more men of all races and backgrounds are gravitating towards the Republican party. The Nickies of the world would be wise to open their minds and adapt if they want to meet a nice, "normal" guy. And Hollywood would be wise to wake-up and accept that not everybody thinks like leftists in LA.

This rant was brought to viewers in part by Target, State Farm and Alka Seltzer Plus Cold Relief. You can fight back by letting these advertisers know what you think of them sponsoring such content.