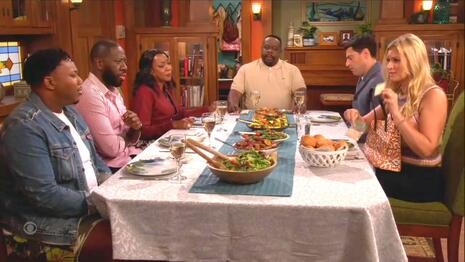 Fresh off an unfunny stint hosting the Emmy Awards on CBS, Cedric the Entertainer premiered a new season of his show The Neighborhood on Monday, September 20, and it was another embarrassing stroll down white guilt lane.

Rather than letting the past remain in the past, the discovery leads into a dialogue about Dave's supposedly unearned advantages in life. When Calvin invites Dave over for dinner, the grace before the meal turns into an insult of Dave's family history.

Dave: Okay, all right, you know what? I deserve that.

Tina: No, you don't, Dave. To be fair, you didn't steal anything.

Malcolm: Exactly. His family did. Dave just benefited from the racist laws that gave his family land that contributed to the generational wealth that was then passed down to make his life a whole lot easier.

Dave: To be fair, I don't think that I received any generational wealth.

Calvin: Well, guess what I got. Every other weekend off, because I had a job!

Dave: Did-did I mention the car had no ac? Kalamazoo Summers were very hot.

Malcolm and Calvin: So were cotton fields.

Calvin: Damn it, Malcolm, I was just about to say that. I guess everybody's just gonna steal from me today.

Dave: Oh, hey. Gemma… Glad you're awake. I had a rough night.

Dave: I just hate knowing that my family was a part of America's racist past.

Gemma: I am sure Calvin doesn't really blame you for crimes that were committed hundreds of years ago.

Dave? Oh, really? Every time we leave their house, Calvin always says, "Good night, Dave." Yesterday it was just... "Night." Trust me, Gemma, he is seething!

Gemma: Give him time to process it. Besides, you can't change the past. We can only work to fix the future. Raising Grover to be an enlightened, anti-racist human is a major part of that.

You have to wonder what sort of clueless (and racist) individual wrote this script. Do they really think only the black person in a middle-class neighborhood had the experience of working a job as a teenager? It is a common experience for kids of any race growing up in middle or working-class American towns to work jobs in order to pay for things like a car.

Also, since "anti-racist" is now code for critical race theory brainwashing, we can presume that poor little Grover, besides being named after a Muppet, is going to have a rough childhood where he is taught to hate himself for the color of his skin.

The rest of the episode has Dave going full Robin D'Angelo, prostrating himself before Calvin who is more than happy to exacerbate Dave's unnecessary feelings of shame. Dave offers Calvin humiliating forms of reparations such as Dodgers tickets.

Dave: I just feel horrible about what my family did to yours.

Calvin: Well, you should. Now I got to get to my shop. Unless your family stole that, too.

Dave: Look, I just... How could they have been so mean and coldhearted?

Calvin: Well, it was the 1800s. White folks didn't have to pretend to be nice to black folks back then.

Calvin: Okay, Dave, move, before I forget you're one of the good ones.

Dave: Just hear me out. Now, I know I can't make up for hundreds of years of oppression, but please, ... (Sighs) Consider these [tickets] my attempt at reparations.

One of the good ones? Does Calvin usually just presume white people are inherently bad? Has nobody in Hollywood ever heard of normal, healthy human interaction between black and white Americans? Do leftists really believe we all just see each other in terms of hatred and judgement based upon race, just like they do in their identity politics seminars?

Finally, Calvin can no longer take Dave's obsequiousness towards him and tells him to stop with the constant reparations. At that point, the dialogue transitions to another tv meditation on America's "racist past."

Calvin: All right, no more cleaning, no more Dodgers tickets, and no more fruit smoothies.

Dave: Calvin, I still need to fix what my family did.

Calvin: Look... I'm not gonna lie. It bothered me. But I talked to Tina about it, and... I realized I shouldn't be directing my anger at you. All right? This is so much bigger than me and you. It's such a ugly reflection on the history of our country. I mean, people degraded each other and they took from each other... I mean, mainly your people from mine, but... ...I digress. But you aren't responsible for what happened 150 years ago.

Dave: Yeah, but I still feel like I need to do something. You know, I joined the national movement for reparations. I sent five black people who I don't even know money through a Cash App.

Money through a Cash App? A sentence like that is eye-rolling in its level of insulting condescension towards black people, but in the show it is treated as a sign of how much Dave cares.

I was hoping that once 2020's murderous year of BLM "love" passed, television networks would let-up on the endless lecturing on how racist and horrible America is, but alas, the hectoring continues. Allowing wounds to heal and celebrating the progress made in the U.S. through the decades does not stoke the kind of division left-wing Marxists thrive on.

Maybe instead of obsessing over racial injustices that occurred 150 years in the past, network television could do an episode on the inequality of middle and working-class servants being forced to mask during COVID while wealthy elites flout all the rules forced upon the little people. Nah, that sort of contemporary inequality might hit a little too close to home.

This rant was brought to viewers in part by Giant, Nature's Bounty and Neutrogena. You can fight back by letting these advertisers know what you think of them sponsoring such content.