'The Neighborhood': Police Are 'Same System' as Slavery 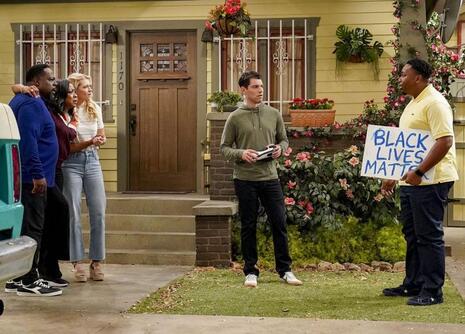 CBS’s The Neighborhood hasn’t been shy about pushing racial issues, so it’s only natural that it becomes the latest show to jump on the BLM bandwagon that’s been reignited this year. The comedy's third season premiere went full “Black Lives Matter” with a terrible “serious” episode.

In the November 16 premiere “Welcome to the Movement,” Malcolm (Sheaun McKinney) mentions to his family how his friend was accosted and arrested by the police for no reason, "We were playing ball down at the park when these cops showed up and just started harassing us. And Trey told them we weren't doing anything wrong, and they, they just threw him on the ground and started beating him up."

Although we never see any context of this arrest, we’re supposed to assume it’s all true and happened because they were "being Black in America.” To prove it, Malcolm organizes a local protest with his family to march on the police station.

In the meantime, Malcolm’s white neighbor Gemma (Beth Behrs) tries explaining to her son Grover (Hank Greenspan) why his father and their friends are protesting. This gives the show the perfect opportunity to spell out their “police are racist” narrative. And to a child, no less.

Gemma: He went with the Butlers to the protest.

Grover: Why are they protesting?

Gemma: Because Malcolm organized one after, you know... Trey got beat up by the po-po.

Gemma: Hey. I know there's a lot going on right now. You want to talk about it?

Grover: I don't understand why the police beat up Trey. Did he do something wrong?

Gemma: No. The police are the ones who did something wrong.

Grover: But they're supposed to be the good guys.

Gemma: Yeah, but there are some bad ones, too.

Grover: So, if there's ever an emergency, should I still call them?

Gemma: Oh, yeah. Of course, sweetie. They would never hurt you.

Grover: Right. Because I'm a kid.

Gemma: Actually, it's because you're white. You see, the police in this country have a history of treating us better than they treat Black people.

Grover: But that doesn't make any sense. Why would they do that?

Gemma: That's a good question. But the answer is kind of complicated.

In case that was too subtle for viewers, the episode goes deeper.

During the protest, the family loses Malcolm, leading his father Calvin (Cedric the Entertainer) and their neighbor Dave (Max Greenfield) to look for him. As they’re driving, Calvin lets loose to Dave about how the police are part of the system that keeps black people “undereducated, over-incarcerated, and out of the voting booth.”

Dave: I can't believe this is happening.

Calvin: Well, what'd you expect? You arm the police like they're going to war, that's exactly what they're gonna do. I mean, those guys were itching for a fight.

Calvin: Tell that to the people being choked out and killed in the streets. Dave, o-of course there's some good cops. But they're a part of a system that was created when we weren't even considered people. We were considered property. And yeah, yeah, I know people love to say that slaves were freed a long time ago, but it's that same system that's got us undereducated, over-incarcerated, and out of the voting booth.

Dave: Maybe you're right, maybe the system is broken.

Calvin: Oh, no. No. The system is working exactly how it was designed.

Dave: I don't know what to say.

Calvin: Hmm. Look at that. I finally found a way to shut you up.

Show creator Jim Reynolds claimed this episode is supposed to “give greater understanding, and hopefully create greater sympathy in that white audience in an effort to affect positive change." However, if that sympathy means pandering to riot-friendly organizations and calling the police part of a racist system created during slavery, Reynolds might end up making more enemies than friends.

However, there is one bright spot to the episode. After being found, Malcolm is tempted to riot at the police station since they refuse to listen to them peacefully. Although Calvin admits, "I'm angry every time another racist cop kills one of us out there," he quickly stomps out the violent urge in his son remarking, “You gotta fight with [your head]. Because your actions, they got consequences that you may not come back from. And you can't help nobody if you dead or in jail.” It’s a shame that a show reminding people that rioting isn’t the answer is somehow noteworthy, but here we are.

Unfortunately, that doesn’t change the obvious slant of this episode. The entire story ends with a short clip show of BLM protest marches, notably without the fires and property damage. Apparently, the whole thing is supposed to encourage people to get more involved with the BLM movement as well as its marches. Looks like COVID isn't a problem in this neighborhood.

This show was sponsored by commercials from Old Navy, Advil, and Coca-Cola.