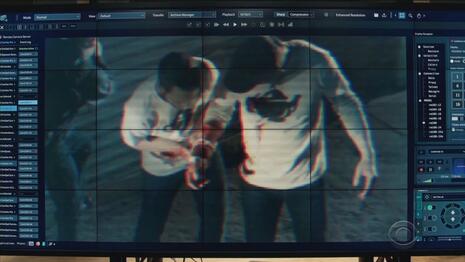 Queen Latifah's new CBS show, The Equalizer, premiered an episode this week that portrayed a bomb-making "alt-right" terrorist group whose symbol was a teapot, which seems to be a not-so-thinly-veiled reference to the Tea Party movement of the 2010s.

In the episode, "True Believer," on May 16, former CIA operative turned lone wolf detective Robyn McCall (Queen Latifah) set out to help a housewife whose husband appeared to have gone down an online rabbit hole of far-right radicals (a common leftist boogeyman trope). The right-wing radicals in the episode regularly referred to themselves as "patriots."

Their leader was a dirty New York City cop who helped them make bombs, one of which was set to blow up an international student house. The cop "was always talking about immigrants. Immigrants ruining the country, cutting in line, taking jobs from real Americans," according to one of the deprogrammed terrorists.

Harry: So, the little teapot on their shirts is a symbol for an alt-right group called the Truth Trappers. They've been flagged by DHS as possible extremists. They're basically a Qanon-type group. You know? Lots of deep state paranoia, talk of revolution and references to an event called The Reckoning, which is basically the violent overthrow of the government by disempowered "Patriots." You know, why is it, when you want to overthrow the government, you're only a patriot if you're white?

Why is it that network television thinks that the greatest threat to the United States right now is fictional right-wing terrorist groups, composed entirely of white males? They keep creating them for their episodes. I could give writers the names of some real-life groups terrorizing the U.S. who killed dozens and caused billions of dollars in damages last year and they were not right-wing.

But Hollywood refuses to create scripts about brainwashed left-wing Antifa or BLM members who commit violence against others. If they wanted to, they could also do a script on radical left-wing Palestinian activists who drive through London streets yelling, "Fuck the Jews. Rape their daughters." They could have written a script about a Bernie Sanders supporter who went down the Russian Hoax rabbit hole on the internet and shot-up Republican congressmen on a baseball field. Somehow, all these left-wing radicals, many of whom organize on the internet, have escaped Hollywood's notice (except to excuse or deny them in many cases).

The Tea Party itself was a never a radical group in any sense. It was composed of average American voters who peacefully protested big government. To use a teapot symbol as a not-so-subtle smear against conservative Americans who were part of that movement is despicable.

This rant was brought to viewers in part by Eliquis, Progressive and Subway. You can fight back by letting these advertisers know what you think of them sponsoring such content.