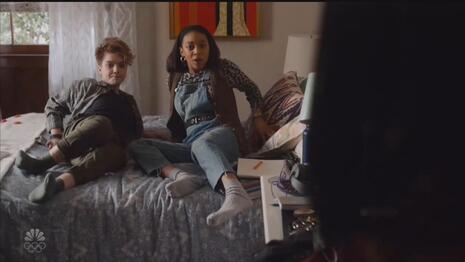 On Tuesday, NBC's This Is Us showed two 13-year-old girls, played by 15-year-old actors, kissing on a bed as a mother walks in on them.

This Is Us has been pushing the “L” part of the LGBT agenda for a number of years now, with the prepubescent character Tess (Eris Baker) “coming out” privately to her family at age 10 and publicly in a drive-thru at age 11.

Now Tess is 13. In this week's episode, "Both Things Can Be True," on April 6, she kissed a supposedly gender non-specific paramour named “Alex” (Presley Alexander). In reality, Alex is a girl who sort of looks like a boy, and requires everyone to use the pronoun “they.” (Presley Alexander came out on her YouTube channel as a non-binary lesbian when she was 11-years-old.)

When Tess’ mom, Beth (Susan Kelechi Watson), was preparing for Alex to come over, her husband Randall (Sterling K. Brown) asked about practicing Alex’s gender pronouns. Beth’s mother, Carol (Phylicia Rashad), interrupted the conversation to let them both know she herself was very woke in her pronoun knowledge.

Beth: Hell yeah. You know Tess is mean when you get those wrong.

Carol: Ooh, you could always call on me for backup. My non-binary pronoun use is impeccable.

Beth: Mom, do you know the difference between gender and bi-gender?

Carol: Bethany, Alex is a teenager, not the gender police. Relax. And yes, I do.  I'm a woman of the times.

When Alex arrived, the girls went straight to Tess’ bedroom and closed the door. When Beth knocked on the door later and opened it, she found Alex and Tess kissing.

Tess (gasps): Mom! What are you doing? I can't believe you just barged in here like that.

Beth: I didn't barge in. I knocked. And I would like for the two of you to please relocate to the couch downstairs, okay?

The actors who play Tess and Alex are both 15 years old. There is no bottom to which the current radical LGBT movement will not sink, pushing gender identity ideology at younger and younger ages. Now even network television actors who are minors are being used in kissing scenes to push the agenda.

The LGBT agenda is a speeding train. It will not stop until it fully reaches its end goal of normalizing the sexual confusion of minors and pushing them at younger and younger ages to "express" themselves.