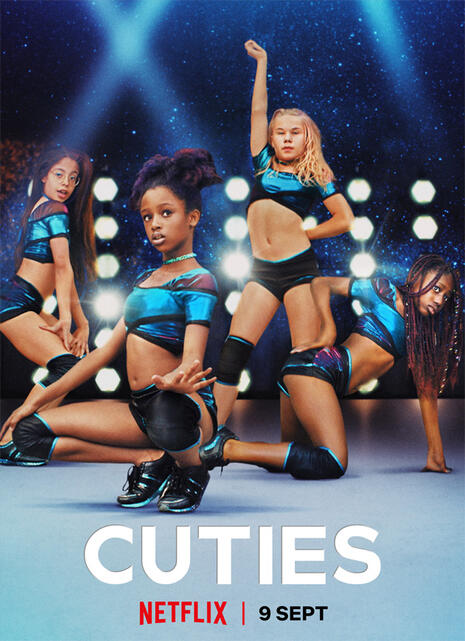 On September 9, Netflix will be premiering the French film Cuties about an 11-year-old girl who "becomes fascinated with a twerking dance crew." The promotional poster alone is offensive (right). In it, the tween girls pose provocatively in risqué dance outfits. The lead actress (Fathia Youssouf Abdillahi) is 11 years old in real life.

According to a Sundance review in Screen Daily from January, "The sight of twerking pre-teen bodies is explicitly designed to shock mature audiences into a contemplation of today’s destruction of innocence...."

On Wednesday, Distractify noted the lack of logic in that statement: "Are we saying it's disturbing of society to promote the early sexualization of young girls while simultaneously sexualizing young girls for a film?"

There are plenty of ways for a film to highlight the problem of sexualization of children without actually sexualizing child actors. Screen Daily claimed "this is a film for and about kids." No, this is a film for child predators and groomers.

What healthy adult thinks children should be schooled in the ways of twerking for an audience.

The French director, Maïmouna Doucouré, explained how she came up with the idea:

"I saw, at a neighbourhood party, a group of young girls aged around 11 years old, going up on stage and dancing in a very sensual way while wearing very revealing clothes. I was rather shocked and I wondered if they were aware of the image of sexual availability that they were projecting. In the audience, there were also more traditional mothers, some of them wearing veils: it was a real culture shock. I was stunned and I thought back to my own childhood, because I’ve often asked myself questions about my own femininity, about evolving between two cultures, about my Senegalese culture which comes from my parents and my western culture."

Are those really the only two choices she saw living in France: hypersexualized girls dancing seductively or traditional veiling? That alone says everything that is wrong with western culture in 2020. And after being shocked, she decided she would create a film with child actors who project that "sexual availability" to the world.

Parents have begun a Change.org petition to have the film removed from Netflix before its premiere in September. The streaming service has premiered content in the past sexualizing children.

Pedophilia and sexual trafficking of children is a global problem. Netflix already has a problem with inappropriate programming for tweens and teens. It should be ashamed to premiere this latest film, but I'm not sure its executives have any sense of shame left.

Update: On Thursday, August 20, Netflix released a statement saying, "We're deeply sorry for the inappropriate artwork that we used for Mignonnes/Cuties. It was not OK, nor was it representative of this French film which won an award at Sundance. We’ve now updated the pictures and description." As of this writing, the streaming service still intends to release the film on September 9.