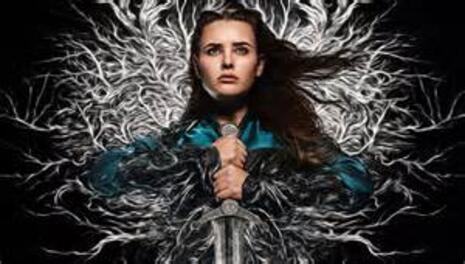 The new series Cursed, which premiered on July 17, is the latest in a long string of programming by the streaming service that turns everything from Christian prayer to Holy Scripture into a supposed dog whistle for evil.

The show is based on the novel of the same name by Tom Wheeler and Frank Miller and is meant to be a re-imagining of the King Arthur legends.

Cursed's primary villain is a Catholic priest named Father Carden (Peter Mullen). He leads a group of genocidal "Christian" monks called the Red Paladins. The monks have crosses marked on the tops of their heads and on their swords. Father Carden wears a rosary by his side. The men crucify Druids and destroy their villages and crops. Apparently, the writers are unaware or do not care that crucifixion has actually been used to martyr Christians throughout history.

The Catholic pope, whom Father Carden seeks to please, is a weirdly effete nutjob with gold-masked troops called "The Trinity."

Throughout the series, the cross is meant to signify cruel and vicious forces coming to slaughter good and honorable Druids. The Druids, called "the Fey," live within the forests. One of the young Fey is named Nimue (13 Reasons Why's Katherine Langford), aka the future "The Lady of The Lake" in the original Arthurian tale. Nimue has special magical powers and is secretly the daughter of the magician Merlin.

When Nimue acquires the Sword of Power, everyone from the Paladins to a ruling king wants to obtain it. The Paladins wish to use it to finish off the Fey.

One of the more disturbing aspects of the show was the way it prefaced nearly every horrifying scene of R-rated violence by the "Christian" villains with Christian references or Christian prayers. It is sickening the way the writers persistently turned or twisted language from Christian theology into ominous warnings that horrifying evil was about to occur.

In the first episode, Father Carden is seen sitting next to a Druid child on a bench overlooking a lovely view. He tells the child, "God is love. It is love that purifies, sanctifies, and unites us. And today, God smiles. Do you know why? Because we've done his work today? You see, God created most of us of in his image. This is his garden and we must tend his garden. We must rake the garden and pull the weeds. The weeds are the demons and we must expel them from his garden."

Carden and his men then proceed to slaughter the child and his village.

In another episode, a blind Paladin torturer named his torture instruments after the archangels, calling one "Michael:" "Let me introduce you to some of my friends. 'God's Fingers,' I call 'em. Each is named for his Archangels. This is Michael. See? When I put Michael in the fire, he glows a beautiful white. Even I can see it. The light of truth. For Michael is truth. You can only speak truth to Michael."

In another scene, a psychopathic nun recites the Apostle's Creed shortly before she decides to burn down the abbey with the nuns trapped inside. She does this because some of the nuns had hidden Druids there.

The "good nuns" at the abbey include two lesbians. (Hollywood currently has a lesbian savior complex.) One of them, Morgana (Shalom Brune-Franklin) hid Druids. She is the sister of Arthur (Devon Terrell) and was forced into the convent by a heartless uncle. She angrily throws her cross necklace into the trash before leaving the abbey.

Most of the other nuns in the convent are weak, terrified women who live in fear of the men. (Have the writers of this series ever met any real nuns?)

Before the scene in which Morgana throws her cross in the trash, she tells Nimue that Druid herbal remedies "did infinitely more than any prayers" to heal a wounded Paladin. Morgana spends the rest of the series helping Nimue save the Fey from the evil "Christian" men.

Another hero by the end of the series is Merlin (Gustaf Skarsgård), although throughout much of the saga he is just an alcoholic who has lost magic powers. In one scene, Merlin relies on signs from a three-headed dead infant to do his work. Even without the graphic violence, the show can be stomach-churningly creepy.

The real Arthurian legends are filled with heroic Christian imagery and stories inspired by aspects of Christian anthropology. Cursed merely uses famous names from the legends, and the motif of the sword, to push bizarre anti-Christian obsessions.

Christians are under attack throughout the world. In the West, hundreds of historic Catholic churches have been burned. Catholics in the United States have been beaten on video for protecting statues of saints.

But Netflix continues to throw more fuel on the anti-Christian pyre with another bigoted series spewing hatred of one religious group. If you have not already cancelled Netflix, now might be the time.