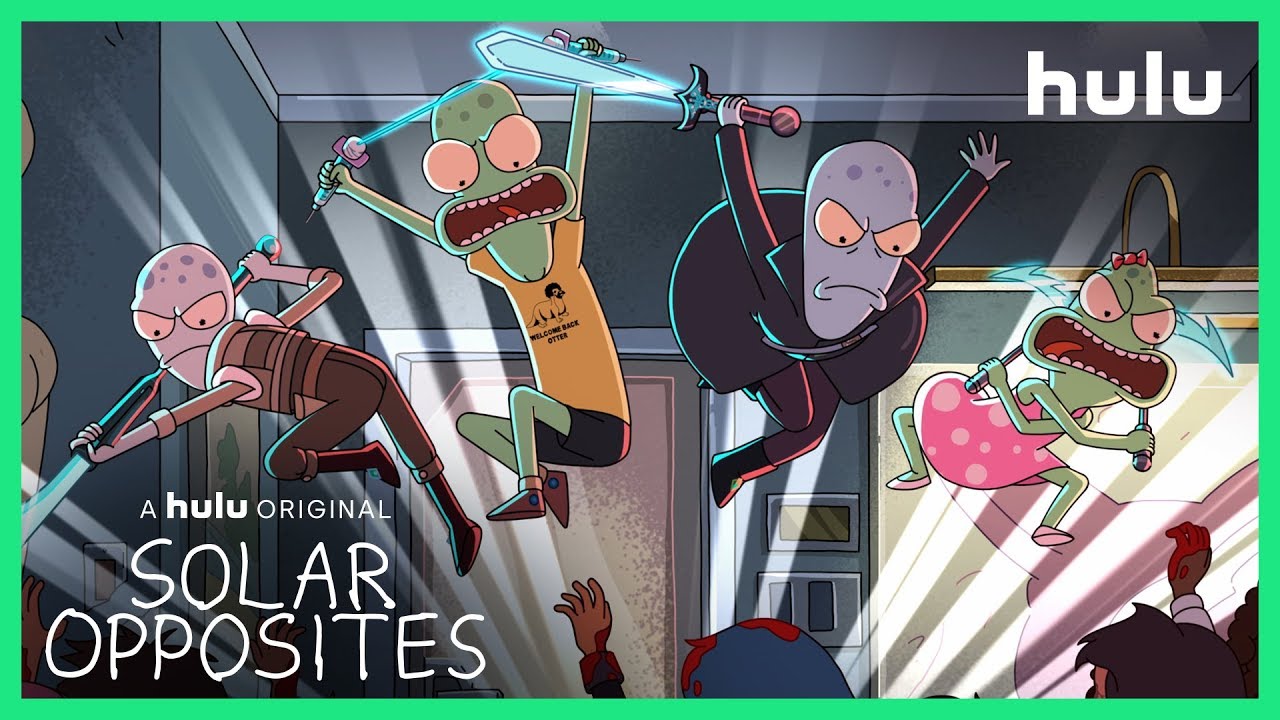 On Friday, May 8, Hulu premiered the new cartoon Solar Opposites, from the creators of Cartoon Network's Rick and Morty. As to be expected from writers whose previous work appeared on CN's "adult swim," Solar Opposites is both vulgar and violent. Perhaps less expected, the show delved into gender politics.

The show is about four aliens who land on Earth after a meteor hits their home planet, "Schlorp." Its creators like to take pot-shots at religion, particularly Christianity. In episode 5, "The Lavatic Reactor,"  head alien Korvo (Justin Roiland) claims "Christ was an alien." His assistant Terry (Thomas Middleditch) accidentally turns a textbook into the "Holy Bible" using a "dumb ray."

Ms. Perez: From Coretta Scott King to Jill Soloway, these are just a few notable feminists who improve the lives of women everywhere. Ladies, this semester your final grade depends on proof that you fought the patriarchy. I want a full report on a glass ceiling you tried to shatter by next Friday.

Jesse: What does that even mean?

Yumyulack: Ms. Perez. What, what do the boys have to do?

Ms. Perez: I don't care, the boys can just draw a picture of a lightsaber or something. You might as well learn now that life is just easier for you.

Jill Soloway is the creator of the Amazon Prime show Transparent. So the cartoon unironically paired the name of someone who created a transgender show with the wife of one of the most important civil rights leaders of the twentieth-century.

Jesse spends the rest of the episode trying to fight patriarchy, but is frustrated because all the boys and men give into her demands without a fight. When she demands to be kicker on the high school football team, the coach offers her starting quarterback. When she approaches the lacrosse team and declares, "Lacrosse is French for 'date rape' no longer. I demand to be on your boy's team," they happily offer her a spot.

Unable to find the feminist fight she seeks, she decides to go after the gamers. She burst into the e-sports room and says, "I know that gamers are misogynistic, and that's why all female bodies in games have unrealistic proportions and are programmed to give the gamer an unhealthy amount of eye contact. Let me in." To her frustration, the gaming team is already almost entirely female.

She tries to create a fake club that does not allow girls, but boys show up to protest its discrimination instead. "As the brother of two sisters, nothing enrages me more than misogyny and this is misogyny," one of the boys says.

Eventually, she discovers that the teacher did not even know what her gender was and thought Jesse would draw Star Wars stuff like the boys.

While all this is going on, the show's two adult aliens, Korvo and Terry, have created a robot to complain about their "man cave" just like their neighbor's wife does to her husband. The robot goes haywire and starts destroying man caves everywhere. With Jesse's help, the aliens subdue the robot. Afterwards, they put the robot in a storage container with a "cuck-bot for company." The head alien claims the cuck-bot looks like "Ted Cruz."

Mocking Christianity, simping for feminism and bashing Republicans:  All in a day's work for a Hulu show, the streaming service that brings you left-wing propaganda like The Handmaid's Tale and Mrs. America.