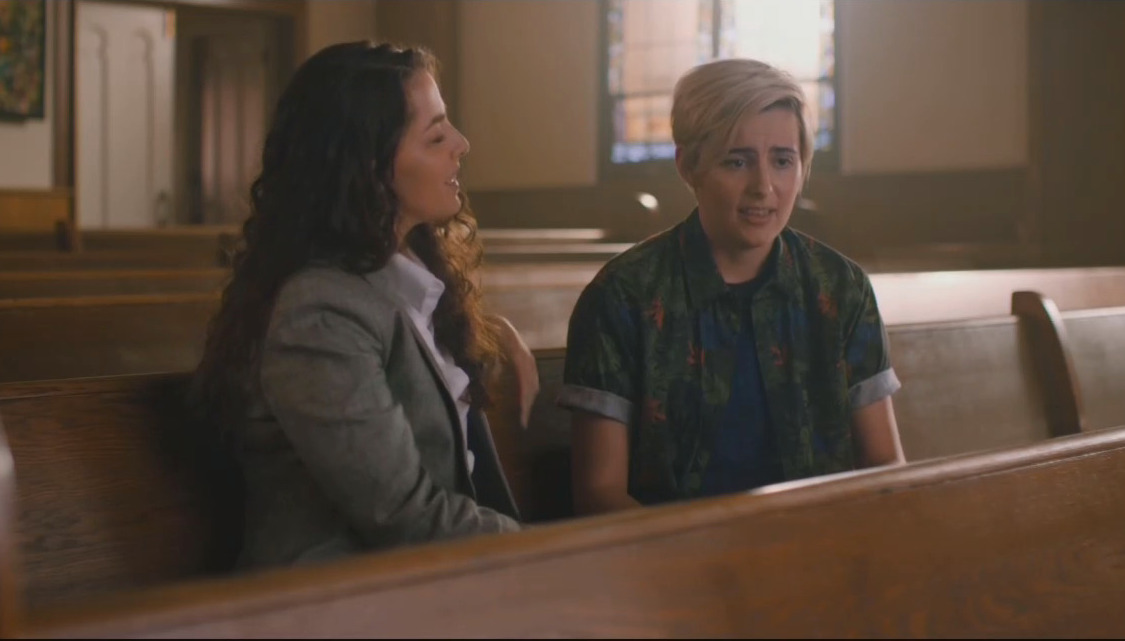 Showtime’s The L Word: Generation Q is a weekly left-wing propaganda lecture with nudity thrown-in. It is the sort of show Shonda Rhimes would create if she did not have the restrictions of network television. This week, just in time for Christmas, the show threw in dialogue comparing a lesbian minister’s relationship with Jesus to an open sexual one.

In the episode, “Lost Love,” on December 22, Hollywood personal assistant Finley (Jacqueline Toboni) gets deeper into a relationship with Rebecca (Olivia Thirlby), another woman she met at a bar. While in bed together, Rebecca tells Finley that her first “sexual partner” was a doll named Sylvia. Later on during a work assignment, Finley discovers that Rebecca is a minister at a local Christian church, the Multicultural Community Church. Finley reacts with shock and has a conversation with her lesbian paramour after the service.

Rebecca: I’m sorry that you had to find out like that. I know that it can be kind of weird at first. Um, I'm actually more closeted about being Christian than I am about being queer.

Rebecca: And it was going so well between us. Right?

Finley: Yeah, this really puts the Silvia thing in, like, a totally different light for me.

Rebecca: Yeah, does it?

Finley: Yeah. 'Cause you're, like... married to Jesus, right?

Rebecca: Yeah. I am. But it's an open relationship. Sexually, I mean.

Rebecca: So, did you have a religious upbringing?

Rebecca: Well, a lot of people that come here have your experience. They were raised Catholic. And then they come here. I try to help remind them that they're not those kids anymore. They can choose what they want to believe.

Rebecca: Have you been in a Catholic church since you were a kid?

Finley: No. God, no, I didn't even go to my grandpa's funeral.

Rebecca: Uh-huh. What do you think would happen if you went to one?

Rebecca: Some churches are safe spaces.

Finley: [Laughs] Not in my experience. So, do you have, like, a direct line to Jesus back there or...?

Rebecca: Yeah, the phone's right in my office.

Finley: See, I don't know if you're kidding.

Of course, the writers would make Finley a Catholic who is now afraid to walk into a church due to childhood experience. Catholicism and evangelical Christianity are Hollywood’s religious punching bags. The sexual left has been trying to co-opt Christianity for decades and purge it of all biblical truth on sexual morality. They have succeeded in many places. Through the leftist lens, the only way to love a homosexual person is to affirm their sexual activities even if those actions are contrary to biblical teaching and natural law.

In between referring to a relationship with Jesus in flippantly sexual terms, the episode tries to defend Los Angeles’s disastrous public school system. Main character Bette (Jennifer Beals), who is running for mayor of Los Angeles, defends LA’s notoriously bad public schools on the grounds that they are “more diverse” than private or charter ones. (Her opponent is a mean straight white man. Literally, every villain in the show is a cold or clueless straight white man.)

Bette tells her opponent, “You were using coded language to imply, among other things, that our city's public schools are inferior. And I would have to ask you, by what measure? If all you do is look at AP scores and, and rankings, then you're missing out on the bigger picture. Our city's public schools have a more diverse student body and faculty that reflects the students back to themselves, and that is invaluable. Diversity matters.” Only a leftist could argue that bad schools are good as long as they can claim an ethnically diverse population.

The L Word: Generation Q is the sort of show every gender-theory professor on left-wing college campuses today can love. In other words, it is stupid, vulgar, boring and, as of this week, blasphemous to boot.