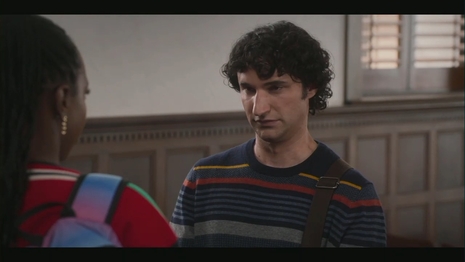 Mindy Kaling’s HBO Max comedy The Sex Lives of College Girls is back for a second season, and so is its liberal agenda and name-dropping. It continues to touch on subjects such as climate change and racism towards black people, while openly hating on white people and using white stereotypes as fodder for laughs.

Thankfully, the name-dropping hasn’t been as bad this season, but that’s not saying much since it was overkill in season one. Late Supreme Court Justice Ruth Bader Ginsberg (RBG) and socialist Rep. Alexandria Ocasio-Cortez (D-N.Y.) (AOC) have been dropped the most, with Kimberly (Pauline Chalamet) proclaiming adoringly in episode 8, “Pre-Frosh Weekend,” that she’s adding AOC to her vision board.

Climate change has been a favorite topic this season, having been mentioned right from the start in episodes 1 and 2.

In episode 7, “The Essex College Food Workers Strike” Whitney’s mom, Democrat senator Evette Chase (Sherri Shepherd), comes to visit her daughter on campus and the topic is brought up again:

Evette: Here she is! My favorite daughter.

Evette: So, this is the place you’ve been spending all your time. I like it. I love this cup.

Andrew: Senator Chase, it’s an honor to meet you. On behalf of my entire generation, thank you for believing in climate change.

Evette: Well, aren’t you nice? And on behalf of my generation, I’m sorry we caused it. That’s not my official position.

When Evette later converses with Essex’s president, he shows her a new dome the school built for mental health purposes. This leads to a random and unnecessary dig at white people for laughs:

President Lacey: Senator Chase, despite what you may have heard from picketing workers, the administration cares deeply about the entire Essex community, which is why I wanted to show you this.

Evette: What am I looking at?

President Lacey: This is our new mental health bubble.

Evette: I’m sorry. What in the white nonsense are you talking about?

President Lacey: With mental health being so important these days, we wanted to create a comfy place where sad students could sit on a West Elm chair and reflect on their issues until they’re happy again.

The show has made other jabs at white people, including a scene in episode 6, “Doppelbanger,” when Willow (Renika Williams) says to Leighton (Reneé Rapp), “I know this might be a silly question to ask a white girl, but do you own a tennis racket?”

Can you imagine if Leighton asked Willow about a black stereotype, assuming it’s true? The idea is so cringeworthy, I refuse to even type out an example. But apparently in Hollywood, stereotypes are acceptable if they’re directed at white people. For the record, I’m a white girl and I’ve never owned a tennis racket.

The show also poked fun at white guilt when, in episode 5, “Taking Shots,” teacher assistant Paul (Zach Reino) is accused by Whitney (behind his back) of “subtle racism” after he mistakes her for the only other black girl in the class, Moriah (Chantalle Williams)...twice. Paul then becomes a caricature of a pathetic, groveling white man trying desperately to be woke:

Professor: The presence of an asymmetric carbon atom can cause…Anyone?

Bela: You were so smart today. You were like, “Uh, it’s a spiral molecule. Bam!”

Whitney: Hey, you go ahead. I’ll catch you later. Hey, Paul, uh, so, my name is actually Whitney.

Whitney: I just wanted to make that clear ‘cause you called me Moira a couple times. So, I’m Whitney, she’s Moira. Alright? We good?

Paul: Mm hmm. Can we talk in private? I promise you; I am not a racist.

Whitney: I didn’t say you were, Paul. Just trying to tell you my name. Please don’t cry.

Paul: Mixing you two up was an honest mistake.

Paul: I know what I’m doing now is putting my trauma onto you so, I am stopping. But let me say that I love black people and culture, and I support black businesses whenever possible.

Paul: You’re good? That felt good. Hug it out?

I’m horrible at remembering names and faces of people of all races, so I could see myself in this situation - not the groveling, but the mixing up of names. There’s also prosopagnosia, or “face blindness,” that as many as 1 in 50 people suffer from in some form.

Then there’s the joke that all white, blonde women look alike. (Ironically, the next episode was about exactly that.) Yet it’s never assumed that race is the reason for that confusion. Considering all this, why is racism the automatic assumption in situations involving people of color?

Whitney complains to two fellow black students about her experience which leads one of them to bash Paul for using what she calls the “white tears card.” Paul finds himself near tears again when Whitney puts him in his place:

Paul: Hello, Whitney. There’s actually something I wanted to share with you. I’ve been listening to this illuminating podcast on race relations in academia…

Whitney: Cool. Look, Paul. I know you mean well and congrats on doing the work, but I don’t want every conversation we have together to be about my blackness and your whiteness. That is not our thing. I want our thing to be that you’re my TA, and I’m your student, and you just get my name right. Can we do that, Paul? And, oh my God, do not cry right now. Okay, I really don’t want to have to console you about this again. That should not be my job.

It can’t be that many white people have been made to feel overwhelming guilt for being portrayed as evil racists when race never crossed their mind. No, it must be that white people like Paul are not only evil racists, but also manipulative, calculating opportunists, utilizing their tears to further hurt and oppress black people - not that they’re genuinely sorry even though they never had a racist thought to begin with.

Racism is wrong, no matter which race practices it. Period. It’s also completely hypocritical to decry racism towards people of color while practicing it against white people.