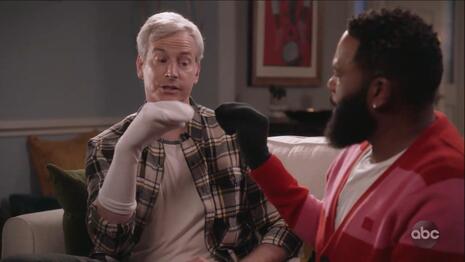 There are some things in life you can always count on. Death. Taxes. And ABC’s racial comedy black-ish painting white people as ignorant, annoying and racist. Which is racist in and of itself, but someone apparently forgot to tell them that.

Tuesday’s episode “What About Gary?” was no different, as main character Dre (Anthony Anderson) attempts to “build a better white man,” by teaching his wife Bow’s (Tracee Ellis Ross) cousin Gary (who is a caricature of the ignorant and insufferable white man) how to be a real ally.

At the episode’s opening, Dre talks about Gary being “BLM’s newest, whitest ally,” as pictures of Gary’s social media flash across the screen depicting him showing support for the Black Lives Matter movement, which apparently, is super annoying to black people if we are to believe this show. Gary calls Dre, and says in exasperation, “Turn on the news. America doesn't care about Black people, okay? We need to make a change asap, and you need to help me.” Then Gary keeps leaving BLM voicemails on Dre's phone.

Equally annoying are all of the other white people “drowning in guilt” and “losing their minds” who are reaching out to Dre and Bow for advice on how they can be good allies:

Dre: I feel that White people are losing their mind, all right? [ Chuckles ] They've all been reaching out because some meme told them to check on their Black friends.

Woman: [crying] What happened to Americ—

Woman #2: I just feel so terrible about my own privilege. If you want to skip tennis –

Woman #3: I think my daughter needs a Black hero right now, and I –

Bow: Okay. Okay. Okay. Enough. None of those people are my friends. Not a one. And that last woman -- she's just someone who found my wallet in 2005. That's crazy.

Dre: Bow, you know what? I feel that the people who are calling are drowning in guilt and are looking for a Black life preserver. But I didn't expect that from Gary!

Bow: The best thing that you can do here is pretend that this call never happened. MM. It's Gary. All right? So in a few weeks, when "The Great British Bake Off" comes back on, he will forget that Black lives ever mattered.

Dre: Yeah, you're probably right. I'll delete them. Yeah. Maybe it'll all go away on its own, just like a jury summons or a red light ticket.

Bow: Oh! Look at this. CVS is alerting us that Black lives matter and there is 20% off of all Tussin.

Later, Dre goes to work and we get the usual ignorant, racist comments from his white boss and white coworkers who think they've learned a lot about race from Dre. Dre tells them about Gary, and is encouraged to help him.

Puffed up with pride, Dre then says in a voiceover, “The guys were right. I had to take advantage of the opportunity to build a better White man.”

Dre then proceeds to educate Gary with photos of black people that he matches with names, black and white sock puppets, and other props. Dre says in another voiceover, “Once Gary and I got going, something beautiful happened.” What was that something beautiful?

Gary explains next, “So, that's how redlining prevented Black people from even participating in the greatest accumulation of wealth in American history? See, they didn't teach us that in school. They taught us that every American had the same opportunity.”

Dre answers, “Well, that's what they wanted you to think. Because if Black people were responsible for our own oppression, then that would make it easier to reinforce the narrative of White success and Black failure. And if our failure was our fault, then White people wouldn't have any responsibility to make change.”

Gary says he hears him and that he wants to be responsible and “do something.” Dre hands him a stack of books and tells him to start by reading them. Dre later brags in a voiceover that he “molded a squishy mind,” and that thanks to him, “Gary was going to be an ally.”

His wife Bow is still skeptical, however, telling Dre, “I am pretty sure that you can’t cure 40 years of racist conditioning in one night,” and, “I grew up in a mixed family. And my cousins and I had these conversations about Reagan all those years ago, the same way you're having them now. This is never-ending, and it is not yours to fix.”

Dre remains optimistic despite Bow’s warnings, until his next meeting with Gary:

Gary: Did you know that right now, as we speak, White gentrifiers are moving into Black communities? Okay, and starting their own charter schools, which takes away the funding from the public schools that everybody else has to go to? So that leaves the Black schools completely understaffed and underfunded. It's terrible.

Dre: You are totally right, Gary, and I agree with you. So, tell me this -- what's your plan?

Gary: I'm glad you asked. First of all, I'm starting a parents' group. We're gonna write letters and make calls every day to politicians. And I think I can also organize a Zoom fundraising concert with the bassist from The Goo Goo Dolls. He's a friend of a friend. Okay. I don't know if –

Dre: Okay. Okay. Gary, let me ask you this -- are you putting your kids in public school?

Gary: Well, great question. And we are considering it. I haven't talked to Jennifer about it, but it is on the table.

Gary: I mean, I wish I could. The school that we're zoned for, the testing scores there are not great, so –

Dre: Okay. Gary, let me get this straight. So, you want to topple the system... but you're not willing to do the one thing that you can do?

Gary: I hear ya, but why do my kids have to be the Guinea pigs? I mean, your kids don't go to public school.

Dre: That's the whole thing! When White kids go to these schools, they suddenly find resources! But my Black kids going there doesn't change a thing. So, if you're not willing to do that, you know, there's not much that we really need to talk about.

Dre: Hey, look, Gary. You know, I really thought this was a great idea, but I'm starting to feel like this is just a big mistake. I'm sorry, but I can't take you on. Okay? Bye.

Gary: Yeah. I understand what's going on. This is part of the process.

When Bow finds out that Gary ended up disappointing Dre, she can’t help but rub it in his face, and the two share smug judgments against white people, claiming they don’t care until it’s “socially acceptable:”

Dre: I had to drop Gary. He got to be too much.

Bow: Dre. Dre, Dre. Dre. Did he surprise you and do exactly what I said he would?

Dre: Thanks for not rubbing it in.

Bow: I knew you would end up here because I have done this so many times before, Dre, and I didn't want you to be disappointed, the way I was.

Dre: Gary wanted to jump in and fix the entire system without owning his own part in it.

Bow: Sometimes I think it's easier to post "Black Lives Matter" and shame your grandma online than look in the mirror and realize that you are complicit.

Dre: Yes! What is it about this moment that so many people are finally comfortable saying Black Lives Matter? Where were they for Aiyana Jones, Trayvon Martin, Mike Brown, Sandra Bland?

Bow: I think that after four years of overt tiki torch racism, it's socially acceptable for White people to finally fight for the dignity of Black people.

If people like Dre are your black “friends,” and you’re a white person, who needs enemies? White supremacists carrying tiki torches aren’t okay. And neither is a leftist comedy that constantly depicts white people as ignorant racists, even those who wish to be allies. Because racism is wrong, no matter who practices it.

Conservatives Fight Back! This episode of black-ish was sponsored by T-Mobile and Dove. Click each advertiser for their contact information so that you can let them know how you feel about this episode!