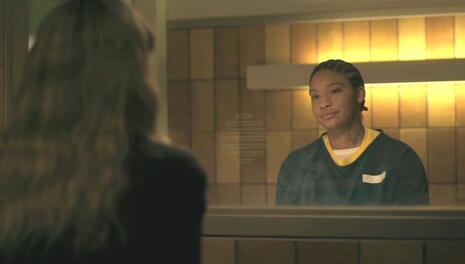 Paramount+ released the first two episodes of their new crime dramedy Guilty Party on Thursday, and though it’s entertaining with big hitter Kate Beckinsale in the lead role as journalist Beth Baker investigating a murder case, the liberal wokeness and race-baiting are nauseating right from the start, claiming that America “systematically kept” a black woman down and cares more about keeping her behind bars than the truth.

In episode one, “The Last Real Journalist Working in Denver,” Beth is working for a pop culture publication after being fired from her job at the Denver Chronicle. She receives a letter from a woman named Toni Plimpton (Jules Latimer), who was sentenced to 92 years in prison for murdering her husband Wallace (Cody Kearsley). Beth’s coworker recognizes the name and realizes she’s “The Dick Cutter,” a nickname earned when Toni tried to “hack off (her husband’s) dick with a pair of kiddie safety scissors” three days before his murder.

Toni claims she’s innocent in the letter, but adds, “No one cares about the truth. They only care that one more black woman stays behind bars.” That’s enough to compel Beth to visit Toni in jail. During their meeting, Toni explains she just got in trouble for “knock(ing) out a bitch’s front teeth” and stabbing her in the eye, but says the woman deserved it, “because she’s a Nazi.”

She also tries to use the “dick thing” as proof of innocence, claiming the whole point of cutting someone’s dick off is to make them walk around without it, so why would she plan to kill her husband? Never mind the fact she claims she “barely nicked him.” She also admits she was alone at work when the murder happened and thus doesn’t have an alibi.

Toni tells Beth her husband was violent towards her and that he and his brother Wyatt (Andre Hyland) operated a gun running business, so she believes the murder was tied to their business. That’s pretty much the only evidence that could slightly be considered in Toni’s favor, but Beth is determined to prove her innocence based on the color of her skin.

In episode two, “Crazy Bitches Who Kill,” the wokesplaining gets even worse, as Beth tells her editor Amber (Madeleine Arthur) and coworkers this is “actually a story of a young, African American wife and mother, who was raised in a country that systematically kept her down and locked her up:”

Amber: (What are you all talking about?)

Beth: Toni Plimpton. She was convicted of killing her husband three and a half years ago, but it’s actually a story of a young, African American wife and mother, who was raised in a country that systematically kept her down and locked her up.

Pierre: Are you talking about The Dick Cutter?

Amber: Yes. You’ve heard of her, too?

Beth: Okay, she nicked her husband’s penis once, but that’s not the whole story.

Pierre: Well, it’d be the whole story for me.

Beth: Amber, trust me. It has everything. It has guns, murder, injustice.

Amber: So, you want to write a story about you saving a black woman?

Beth: No, the story’s not about me.

Lulu: But, the goal is to save her, right?

Beth: From a life of wrongful incarceration, sure.

Pierre: She cut a dick. There are consequences when you do that.

Fiona: Sure. But maybe we’re not understanding. Okay? If Toni was white, you’d still love the story, right?

Beth: Right, but if Toni was white, she wouldn’t be in prison.

Beth: The optics? Since when does Fiona have to be a wizard to write about wizards?

Fiona: Dude, what the fuck?

Beth: Okay, I’m sorry, you guys. I’ve been doing this a lot longer than all of you, and this is a huge opportunity. I just feel like, when do we ever get to write a story that’s great and also redeems a human life? But that’s why we signed up for the job. Or at least it’s why I did.

Amber: Okay, fine. But please, God, keep it short for once.

So, despite the evidence against Toni, her history of violence that’s continued in prison, and a guilty verdict, everyone’s now on board the “guilty until proven black” bandwagon with Beth? At least give us facts. Evidence. Something tangible to make this storyline more believable.

But to use race as the only evidence of innocence and expect viewers to just blindly play along isn’t entertaining in the least. I declare this show a “guilty party” to the typical, woke race-baiting and division that’s so overdone in Hollywood. Let’s hope it’s sentenced to cancellation after this season.