TBS Anti-Christian ‘Comedy:’ God Is ‘Sick Son of a B*tch’ 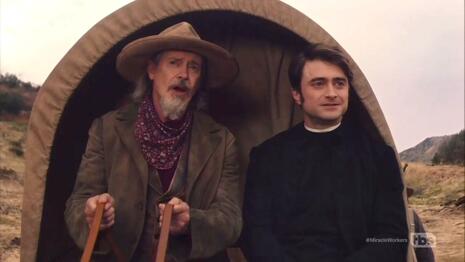 TBS’s God-bashing comedy anthology Miracle Workers debuted their latest season, this one set on the Oregon Trail back in 1844, on Tuesday. If you were hoping they couldn’t possibly find a way to blaspheme Christians and God in such a setting, as they did in the first season which took place in Heaven, you’d be very wrong. And it’s the reverend (because, of course) who delivers the worst line of all, calling God a “sick son of a bitch.”

Miracle Workers: Oregon Trail’s premiere episode, “Hitting the Trail,” opens as Reverend Ezekiel Brown (Daniel Radcliffe) oversees a funeral for someone who died from cholera. After another victim falls to the disease in the middle of the funeral, and residents of the tiny town realize there’s not enough harvest to last through the winter, they decide to head to Oregon at Ezekiel’s suggestion for hopes of a better life. Their only dilemma is they need an experienced guide to show them the way. Enter the show’s other main star, Steve Buscemi as outlaw Benny the Teen (who is clearly not a teen), a notorious criminal wanted by the sheriff for murder and theft.

Pretending to be someone else (“John Nobody”), Benny agrees to lead the residents west as a means of escape after the sheriff comes looking for him in the town. During the trip, Ezekiel begins to realize that John is the wanted criminal Benny, and as an effeminate bounty hunter known only as The Man in Black (Karan Soni) intercepts the caravan, Ezekiel points Benny out to him, leading to Benny’s capture.

But that leaves them with a big problem that Ezekiel didn’t consider ahead of time. They’re well on their way to Oregon and in the middle of nowhere with no idea how to proceed, which leads to Ezekiel’s breakdown and blasphemous lament against God:

Ezekiel: Yeah! Yeah, great. Benny's off to jail and it's gonna be smooth sailing all the way to Oregon. I am perfectly capable of leading us. I just need to figure out which way is west.

Prudence: Um... Huh. Yeah, this isn't a map. This is an anatomical drawing of a horse.

Ezekiel: Yes, so it is. Hmm, there are its powerful haunches. Oh, God. We're screwed, aren't we?

Ezekiel: It doesn't make any sense! Why? Why would God send an evil man to lead us on a righteous mission? Why, God, why? What do you want from me? Is this some sort of test, you sick son of a bitch?

Ezekiel: You want me to crawl on the ground and spank my little arse, do you? I'll do it! Is this what you like? Am I a good little piggy? Oink! Oink!

Prudence: Hey, cut it out. Come on, knock it off. Get up. Hey! Listen. What if God isn't punishing you? Maybe God's okay with you doing a little bad if it means doing a lot of good?

Todd: Prudence? Where are you? I blasted through that toilet paper. We're gonna need something much stronger.

Ezekiel: Do you have to deal with that?

Prudence: No. Todd can take care of himself. Let's get out of here.

Which leads to our next lovely plot point. Prudence Aberdeen (Geraldine Viswanathan) is married to Todd (Jon Bass), an imbecilic misogynist who treats his wife as his personal servant. There is obvious chemistry between Ezekiel and Prudence and it’s apparent Ezekiel has pity on her for being married to someone like Todd.

We can clearly see where this is heading and previews of upcoming episodes seem to confirm a romance between the man of God and the married woman. Because in Hollywood, there’s no such thing as a good Christian who does their best to obey God. Even the town’s residents, who are all likely Christian as well, laugh at Benny as he tells campfire stories about being caught in the act of adultery by a husband who he ends up shooting. LOL!

We get it. This is supposed to be lighthearted comedy that’s not to be taken too seriously. But when comedy constantly turns into bigotry against Christians and God, it becomes very unfunny very quickly. It’s also entirely unoriginal. Can’t Hollywood find someone else’s faith and values to mock and degrade for a change?

Conservatives Fight Back! This episode was sponsored by AT&T, TD Ameritrade, and Taco Bell. Click each advertiser for their contact information so that you can let them know how you feel about this episode!