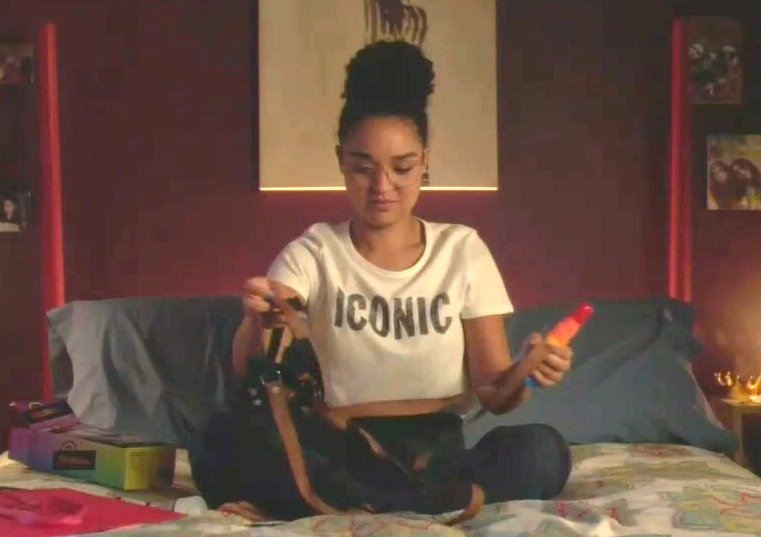 Kat, previously straight before she proclaimed herself a lesbian, is back to questioning her sexuality and sleeping with a male bartender. Said bartender asks Kat during one of their trysts if she would “peg” him, which involves a woman wearing a strap-on and penetrating the man. Shocked and scared at first, she begins to warm up to the idea when the girls talk to their coworker Alex (Matt Ward).

Alex went on a date with a woman who is much more successful than he is, as well as domineering. When he tells the girls he doesn’t think he’ll keep seeing the woman, Kat interjects and explains that they're both afraid in their relationships. Because that's what “the patriarchy” taught them.

Jane: So, what I'm hearing is, you're gonna walk away from an incredible woman because of your ego.

Sutton: What about all the stuff that you said to me about Richard, you know? "Let him buy you the sewing machine. The power struggle is in your head."

Alex: That's not what I said.

Kat: But that's what you meant.

Alex: Why do I feel like I need a lawyer?

Sutton: Maybe you do.

Kat: But it's scary because it's different than what we were taught to expect. Patriarchy has taught us that men are supposed to be powerful, women are supposed to be submissive. That's it. So, you feel like less of a man without your power, and I feel like less of a woman with it. But that's trash. Okay. Okay, I'm gonna do it. I'm gonna peg Cody.

Kat even dons a strap-on to work the day of their next date. “I strapped it to my inner thigh just to feel the energy between my legs,” she boasts to her friends.

"The patriarchy" was at it again as Jane (Katie Stevens) discovered that she’s not the only one among her friends who has ever gotten a yeast infection, which leads to a TMI conversation. “Why did I not know that you guys get yeast infections,” Jane asks incredulously. Sutton (Meghann Fahy) answers, “Well, it's not something you necessarily advertise like, ‘Hey, everybody. My vagina's making yeast!’"

You can probably already guess who is to blame for their silence on vaginal yeast. Yes, the same women who helped retrieve a vaginal egg that was stuck in Jane’s vagina, who shop together for sex toys and strap-ons, and who share every graphic detail of their sexual encounters are hesitant to talk about something as normal as a yeast infection because of…the patriarchy. Sutton proclaims as Kat nods her head vigorously, “It's the patriarchy, bro. Gettin’ in our heads, messin' with it.”

If this is all oppression by “the patriarchy,” I can’t imagine what would be left to say or do that hasn’t already been said or done if they were ever free from their invisible prison.