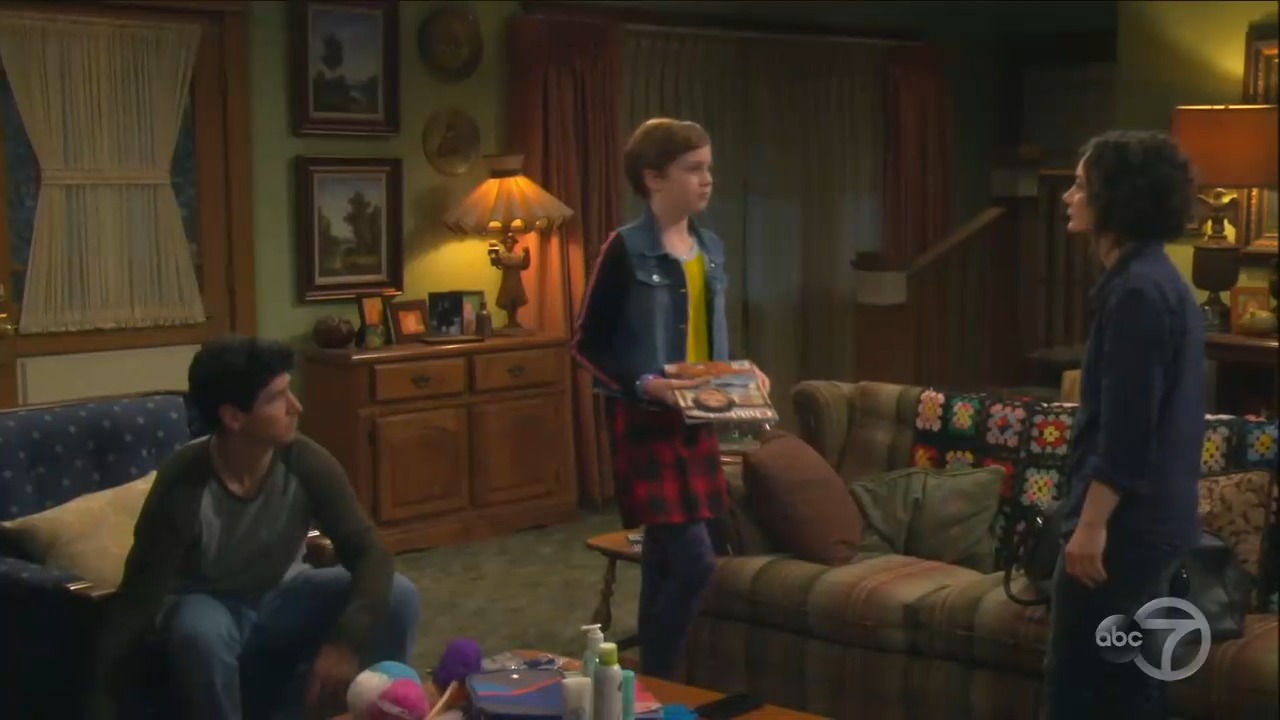 ABC’s The Conners has left hints here and there that Darlene’s (Sara Gilbert) 12-year-old son Mark (Ames McNamara) might be gay and from the start of Tuesday night’s episode, “A Kiss is Just a Kiss,” Mark is seen wearing a skirt over leggings. But it’s when the principal calls to inform Darlene that Mark is in trouble for kissing a boy at school that we find out there is no longer any doubt that the young boy is gay.

After Darlene speaks to the principal, she announces to her family, “So, we have to go see the principal tomorrow because your school has a 'No PDA' rule and somebody posted a picture of you kissing your friend Austin at school." Mark’s sister Harris (Emma Kenney) remarks, “He wins at everything, and now he has a boyfriend? I hate you!”

Darlene asks Mark why he didn’t tell her that Austin is his boyfriend. “I don't know,” Mark replies. “I guess he's my boyfriend. When we found out they were gonna start serving personal pizzas at lunch, we got so excited that we kissed.”

“I get that,” his grandfather Dan (John Goodman) quips. Darlene then asks Mark, “Well, there is a longer talk to come, but have you guys done anything more than kiss?” Mark answers, “No, just the kiss. And that was the first time. He only told me he was gay last week.” Darlene then tells him no more PDA because he’s at school to learn.

Later, Mark and Darlene and Mark’s father David (Johnny Galecki) meet with the principal, along with Austin and his grandmother:

Darlene: I think we can take care of this in a couple minutes. This whole thing's crazy.

David: I'd just like to make an opening statement. Um, well, as Mark's father, I-I'm no longer taking a sidelines position on his upbringing. I-I am now fully in the picture, and as such, uh, I, too, think this whole thing's crazy.

Principal: I'm sorry, but we have rules about public displays of affection. Mark and Austin are getting three days detention.

Darlene: What?! Is this because they're two boys? Because when I was here, kids kissed all the time. My sister, Becky, kissed her teacher, and she didn't get detention. She got an "A."

Principal: We don't differentiate on the basis of gender.

Darlene: Well, that's not what I heard. Is that what Austin told you?

Mark: That's not what happened.

Austin: Yes, it is. I was just in line for pizza, and you came up and kissed me.

David: Uh, Mark doesn't lie. That's not how he was raised. I-I wasn't there for a lot of it, but I'm pretty sure.

Grandmother: Who are you gonna believe? My kid or the boy with the nail polish?

Darlene: Hey, wearing nail polish doesn't make you a liar. Now, Austin, I know this is hard, but you just got to tell the truth.

Grandmother: Don't talk to him.

Austin: I am telling the truth.

Mark: No, you're not. You said you liked me.

Grandmother: Austin, wait outside. You raise your kid however you want, but I've got enough on my plate raising Austin by myself. I don't need your kid confusing him into thinking he's something he isn't!

Grandmother: I don't need to listen to this.

Darlene: No, yes, you do. Maybe you don't want to accept the fact that your grandkid might be gay, but you scaring him into denying it’s just gonna ruin his life.

Of course, the person who is opposed to homosexuality is hateful and cruel. They never portray people of Christian faith, for example, who believe homosexuality is a sin, but are still kind and loving to all.

Later, Darlene and David find Mark in his room removing his nail polish and he tells them he’s decided not to wear it anymore:

Mark: I can't believe Austin said those things. He won't even talk to me now.

Darlene: Well, you know that's because of his grandmother, not because of you.

David: Yeah, and his grandma's old. I heard her coughing in the hallway. One more bad flu season, and you guys are back together again.

Mark: You told me I shouldn't hide who I am, and look what happened.

Darlene: Yeah, but you shouldn't hide who you are. Austin has to do that. You don't wanna live like that, right?

Mark: My life would be so much easier if I wasn't gay.

Darlene: Hey, stop it. This is not your problem. This is their problem. Forget what I said about not being mad. Austin's a jerk for turning on you, and his grandma's a jerk for not caring how much she's hurting the two of you. You should be mad, and you should stay mad 'cause you're amazing and everybody else sucks!

Mark: Is liking someone always gonna be this hard?

Darlene: Oh, you mean falling in love? Yeah, love is freakin' brutal. I mean, just take your dad. I thought he was my soul mate, and then he left for nine years.

Darlene: Yeah, but it's a good one.

David: Alright. I think we may have gotten off topic. What's important is that someone wonderful will eventually come along. You know, I think the hard part is that you know who you are at a very early age. And that's great. But until the other kids catch up, it might be a little lonely.

Mark: Well, what do I do until then?

Darlene: Well, that is where you're lucky because you have a really fun family!

Mark: Get off me, you weirdos!

Darlene: No! Do you feel better now?

Could it be possible that Austin might really be confused? Why isn’t that possibility mentioned? Puberty is a confusing time and the rush of hormones can cause you to feel some strange attractions and feelings that don’t necessarily stay. But Hollywood is really pushing the homosexual angle on children lately. Last fall ABC had pre-teens come out as gay on This Is Us and A Million Little Things. How long until they're declaring kids to be pansexual?