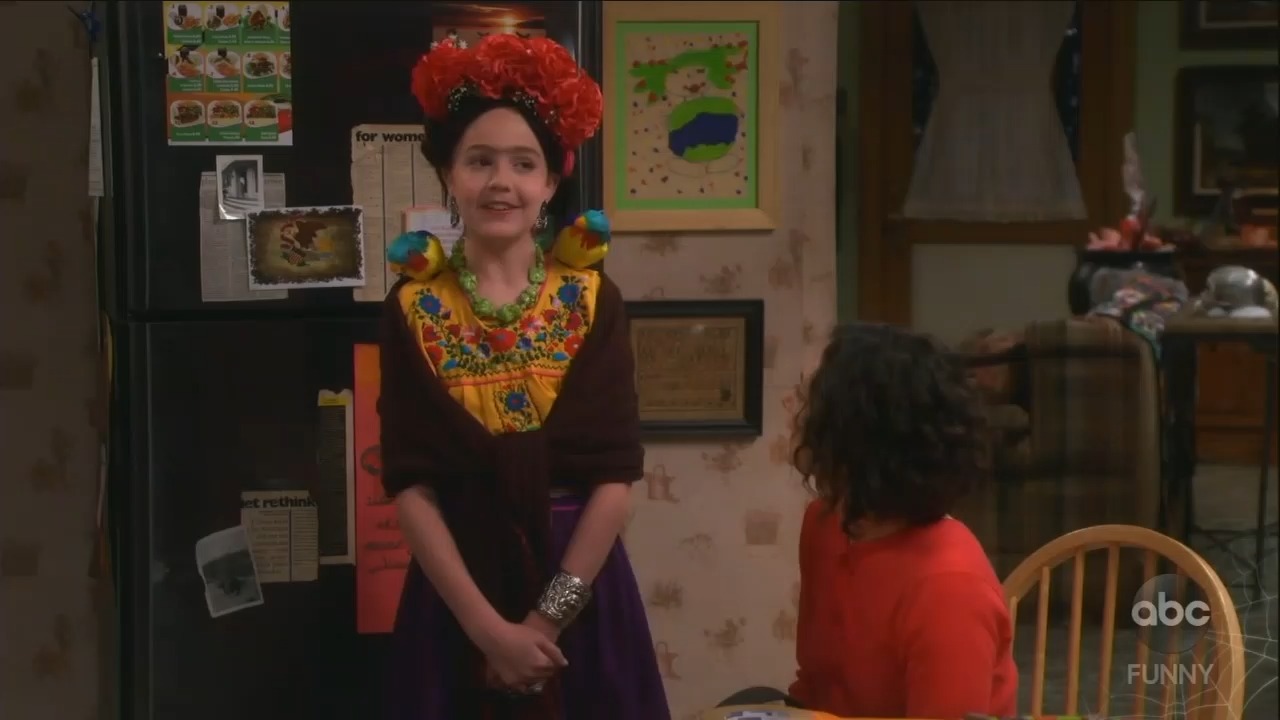 Darlene (Sara Gilbert) missed an email from her son Mark’s (Ames McNamara) school warning that certain costumes are banned for the school’s Halloween carnival, leading Mark to learn at the last minute that his Fortnite costume is banned because it’s based on a violent video game.

Jackie: Well, this is stupid. What kind of costumes are they banning?

Darlene: It says, "No costumes that perpetuate negative ethnic stereotypes or are scary, gory, or anything that's saddening." Our whole family is saddening. Does that mean we can't go out anymore?

Dan: It's Halloween for God's sake! 24 hours without laws or rules!

Darlene: All right, well, don't worry. It's gonna be fine. We still have two days to come up with new costumes. None of us want to offend anybody, right? It just has to be something other than... a bandito, a geisha, zombie, ninja –

Dan: Who's offended by a ninja costume? I've lived in Lanford my whole life and have yet to run into a ninja.

Darlene: All right, uh, I got to go. Where are my damn keys?

Dan: Look, Mark's your kid, but I know your mom and I would've fought this thing tooth and nail.

Darlene: Look, I don't want to get into it with these people. I already owe them money for Mark's field trip to the dairy farm to see how milk is made.

Jackie: Chinese kids are building robots. Our kids are confused about what cows do.

Dan: Look, if you don't want a problem with the school, that's one thing, but tell your son this is a bunch of P.C. crap. He ought to be able to wear whatever he wants. At least this way, he'll know he didn't do anything wrong.

Darlene: I know that you and Mom felt that way, but maybe I don't. Some stuff does cross the line, and Mark will be completely fine in a different costume.

Mark ends up quickly creating a costume based on his favorite artist Frida Kahlo’s self-portrait, “Me and My Parrots.” Darlene brings him to the school carnival, but they are stopped at the door by the principal, Mr. Swindell, who tells Darlene, “Your son dressed as Frida Kahlo could be perceived as offensive.”

Darlene: I'm sorry, Mr. Swindell. What exactly is the problem with his costume?

Mr. Swindell: He is dressed as an Hispanic woman. That falls under cultural appropriation.

Darlene: No, it's cultural appreciation. He loves Frida Kahlo.

Mr. Swindell: The guidelines were clear. He has not experienced what a person of that ethnicity has experienced. Therefore, he does not have a legitimate entitlement to use or wear any element of their ethnic identity. Could you just let the grapes go by, please? That's not a comment on migrant workers, is it? All right, go ahead. Go ahead. Thanks. Now, please, I don't want Mark to miss the carnival. Just lose the costume. You can come right in.

Mark: I worked hard on this costume. I made it especially for this carnival. Can't I please come in?

Darlene: Listen, I get what the rule is for. I really do. But sometimes the good intention of the rule gets taken a little far, don't you think?

Yes, Darlene. Yes, it does. Bravo to The Conners for showing that in this storyline and having Darlene and Mark leave rather than capitulate! Turns out not all Hollywood sitcoms are scary to watch on Halloween!