If there’s any doubt about Hollywood’s extreme liberal bias, and their attempt to influence public opinion towards the left via the shows they produce, look no further than the so-called “King of Sitcoms,” Chuck Lorre, who is known for voicing his opinion at the end of the shows he creates via snarky, leftist vanity cards. Thursday night was no exception, as another card appeared, this time after his CBS comedy Mom, that shows Lorre is still carrying a torch for the Russian collusion conspiracy theory, even seven months after the Mueller report proved there was no basis for it. 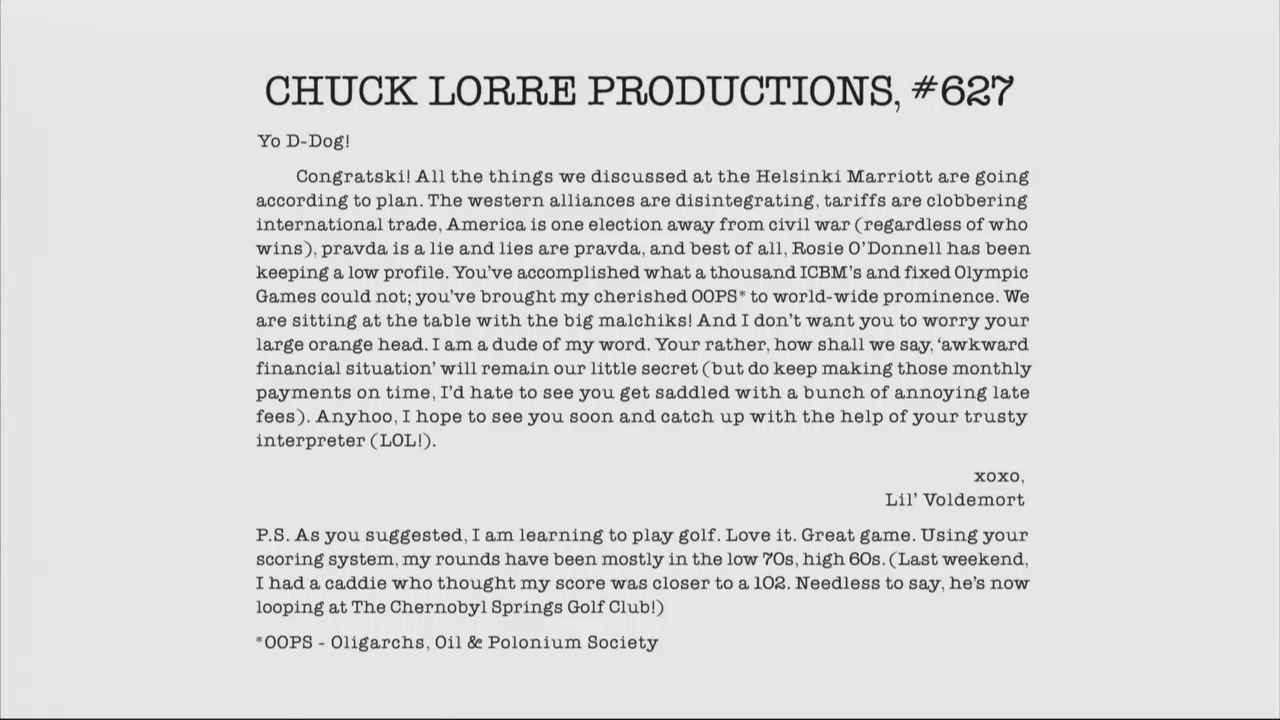 Congratski! All the things we discussed at the Helsinki Marriott are going according to plan. The western alliances are disintegrating, tariffs are clobbering international trade, America is one election away from civil war (regardless of who wins), pravda is a lie and lies are pravda, and best of all, Rosie O’Donnell has been keeping a low profile. You’ve accomplished what a thousand ICBM’s and fixed Olympic Games could not; you’ve brought my cherished OOPS* to world-wide prominence. We are sitting at the table with the big malchiks! And I don’t want you to worry your large orange head. I am a dude of my word. Your rather, how shall we say, ‘awkward financial situation’ will remain our little secret (but do keep making those monthly payments on time, I’d hate to see you get saddled with a bunch of annoying late fees). Anyhoo, I hope to see you soon and catch up with the help of your trusty interpreter (LOL!).

P.S. As you suggested, I am learning to play golf. Love it. Great game. Using your scoring system, my rounds have been mostly in the low 70s, high 60s. (Last weekend, I had a caddie who thought my score was closer to a 102. Needless to say, he’s now looping at The Chernobyl Springs Golf Club!)

Lorre even shared a vanity card in April specifically in reaction to the Mueller report shortly after it was released, hinting that America has gone “mad,” (way to belittle mental illness, there, at a time when people are fighting such stigma in order to reduce the increasing number of suicides every year), and saying that Trump is a “dark, deranged soul” who started the madness.

As many stories on Newsbusters prove, Lorre’s political opinions aren’t limited to his vanity cards. His bias seeps through frequently into his many sitcoms, including this week’s premiere of Young Sheldon and his new comedy Bob Hearts Abishola.

No doubt we’ll unfortunately see an increase to this extreme bias as we get closer to the 2020 presidential election, as has proven true of Lorre in the past.