CBS’s Mom centered most of their entire Thursday night episode, “Tantric Sex and the Sprouted Flute,” poking fun at hippie, vegan, Prius-driving liberals. And it was awesome.

Mom is about a young mother, Christy (Ana Faris) who is newly sober and trying to repair her relationship with her newly sober mother Bonnie (Allison Janney). At first it seems like they might be painting the leftist character Brad in a good light. Christy says, "I mean, he drives a Prius. Prius equals sincere, everybody knows that."

But before long, it becomes obvious that Mom is making light of Brad and his liberal world-views, such as his belief that the human body wasn’t designed to consume meat (Brad took Christy to a vegan restaurant called The Sprouted Flute for their first date).

Christy is excited that Brad “knows so much about the environment and food and politics,” and is in awe over his worldliness, but her mom Bonnie definitely has a very different opinion of him.

Brad: Okay, now add a slice of eggplant and hit that with another scoop of cashew cheese.

Brad: You know, before I became a vegan, my favorite meal in the world was a bacon cheeseburger. And then I realized I was tired all the time.

Christy: I'm tired all the time.

Brad: And I couldn't focus.

Brad: I was moody.

Brad: Close your eyes. I want you to taste something.

Christy: Okay, but just so you know, I once had a bad experience with this exact scenario.

Christy: Yeah, he said that, too.

Christy: I really want to say yes. Give me another bite. Now this I like.

Bonnie: For kissing her? She's in a serious slump; get at it.

Christy: Brad, this is Bonnie, my mom. Bonnie, Brad.

Christy: Brad and I are making dinner.

Bonnie: Oh, what are you cooking? 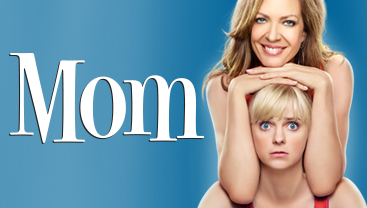 Christy: Actually, nothing. Brad is showing me how to prepare a raw, vegan lasagna.

Christy: Um... Why are we doing this again?

Brad: Eating raw food is how human beings have thrived for millions of years.

Bonnie: Thrived? Those guys died at 18 and walked around like monkeys.

Christy: All right, off you go.

Bonnie: All right. See you.

Brad: Shall we eat?

Christy: I eat all the time. Kiss me.

Bonnie: Nice. You have no idea what's going on back at my place. Christy's vegan boyfriend is preparing a feast fit for a gerbil.

Later, Adam introduces Christy to tantric sex. Bonnie, who likes to call him names like Captain Prius, King Kale, Jolly Green Average Height and Tofu Gigio, isn’t impressed by this news either. "Ugh, is that the sex where you don't finish?" she asks, then laughs hysterically when Christy explains, "Brad says the orgasm is greatly overrated."

When Christy and Bonnie hug goodbye as Bonnie prepares to move in with Adam, Bonnie notices a not-so-pleasant smell. Christy tells her that Brad introduced her to a natural deodorant. “It’s not working,” Bonnie tells her. “I know,” Christy admits.

Brad also introduced her to “mung bean pizza” which he says tastes much better than regular pizza. Christy tries to find a polite way to agree while Brad tells her it’s good for her colon. As he starts to teach her how to meditate, her stomach interrupts with loud, rumbling sounds. “Well, the old girl’s trying to say something,” Christy quips. "Don't judge it. Observe it," Brad tells her. "Observe it? I can taste it," Christy exclaims.

The final straw for Christy happens over dinner at her mom’s and Adam’s place, as Bonnie and Adam eat delicious, barbecue ribs while Brad prepared food for Christy and himself to eat in place of the meat:

Christy: This was a good idea, Mom. Right?

Bonnie: I hardly ever get to see you, and this dinner gives us a chance to get to know Brad.

Bonnie: I told you to record it.

Adam: A game like that you need to watch live. Am I right, Brad?

Adam: Really? What, were you raised by women?

Christy: Brad's more of an outdoorsy guy. This morning, we took a nature walk, picked up litter, and saw a fox. Well, Brad saw it. I was trying to spear a condom with a stick.

Brad: I hope you don't mind that we brought our own food. I try not to be one of "those people" who imposes their lifestyle on others.

Bonnie: You hear that? Brad doesn't impose his lifestyle on others.

Adam: Is this about the towels again? I told you, I like 'em folded in thirds.

Bonnie: You didn't tell me, you lectured me.

Adam: Well, that's 'cause when I said it nicely, you laughed at me.

Bonnie: I thought you were kidding.

Christy: Speaking of towels, Brad and I have been sharing one to cut down on our water footprint.

Brad: I've also turned her on to mindful flushing.

Christy: Yep. If it's yellow, let it mellow.

Adam: Or you could just cop a squat at the neighbor's.

Bonnie: How many times do I have to say I'm sorry?

Adam: Christy, you sure you don't want some ribs?

Christy: They do look good. But I'm trying to make healthier choices.

Brad: It's not just for our own sake. You do know that the livestock industry is destroying our planet.

Christy: Why don't you tell them about your podcast?

Brad: Oh, yeah, yeah, sure. It's called Giving Up with Brad Partridge.

Bonnie: So, it's about assisted suicide?

Brad: No. This is assisted suicide.

Christy: Brad teaches that happiness is not about getting stuff, it's about giving stuff up.

Brad: See, our culture has it all wrong. We spend our entire lives accumulating things when, really, we should be giving them up.

Bonnie: Like a cabinet full of coffee mugs you think chronicle your life?

Adam: Or a Ziploc Baggie full of old hair extensions?

Bonnie: You said that was my drawer. Why are you looking in my drawer?

Adam: Why you looking at my mail?

Bonnie: Why'd you ask me to move in if you're gonna be so freakin' weird about everything?

Christy: Aw, been nice knowing you.

Christy finally admits that she didn’t really like anything about Brad, except for the fact that he was interested in her. “Are you that desperate,” Bonnie asks her as they eat ribs in bed together after Bonnie moves back in. “Yes, said the girl eating ribs in bed with her mother,” Christy replies.

Mom is all about how dysfunctional and abnormal Christy and Bonnie are, so for them to recognize how odd a vegan, Prius-driving, tantric-sex having, water footprint minimizing, extremist hippie liberal is, you know it must be bad!

Good for Christy trading in mung pizza for barbecue ribs and giving Brad the boot! I’m sure he’ll be able to find a nice, female version of himself who’ll be happy to go on a date with him to pick up condoms with sticks and who truly enjoys raw, vegan lasagna.

Thankfully we won’t be subjected to his antics anymore on Mom, unless it’s for a good laugh!