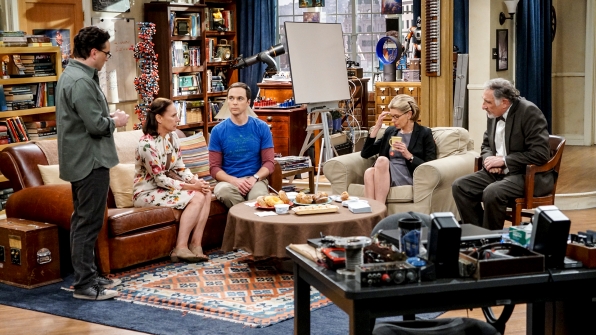 Well, CBS has brought back its popular comedy, Big Bang Theory for its 10th season (insert sarcastic “whoop” here). This series is well-known for its snide science-y remarks explaining every case scenario one may find themselves in, but the season premiere mocked "Bible-thumping bumpkins."

Monday's episode, “The Conjugal Conjecture,” picked up where the last season left off. In a nutshell, Penny and Leonard plan to renew their vows with their families present – as they had eloped prior.

Leonard’s parents appear less than stimulated to be there, as they fight constantly. This erupts into a possible “coitus conundrum” as it’s believed Sheldon’s mother, Mary (Laurie Metcalf), and Leonard’s father, Alfred (Judd Hirsch), may have done the dirty.

From this, Sheldon displays continued badgering towards his mother throughout the episode, poking fun at her Christian beliefs. When she denies sleeping with Leonard’s father and asks how that’s believable Sheldon responds sarcastically, “A man named Jesus convinced you to build a church in Africa. You're kind of a sucker.” It should however be noted, Sheldon did “defend” his mother when Leonard’s mother, Beverly (Christine Baranski), referred to her as a “Bible-thumping bumpkin,” but commends her accuracy in the name calling.

Meanwhile, Penny’s family, consisting of parents and a brother, deal with her brother and his recent release from prison. Penny’s mother would like to hide the fact her son is a druggie and play aloof that her family is perfect. Dad, on the other hand, likes to poke fun and pretend everything is fine and a big joke, much to his wife’s chagrin. Gee, Hollywood loves to make those dads out to be idiots, don’t they!

As the episode continues, both families are united at the wedding and witness Penny and Leonard’s vows to one another without a priest, minister, or church…shocker!

At the episode’s conclusion, Amy, Sheldon, and Mary are in the car. Sheldon again pokes fun at his mother, to which she demands he show her respect. He responds with a bewildered “Yes, ma’am,” and quiets down.

Maybe Sheldon is the TV character we’ve been waiting for who still understands respect for their parents? That’s a theory for another day.