Hulu’s ‘Harlots:’ Lesbian Affair is 'The Lord’s Work,' 'She Feels My Sin' 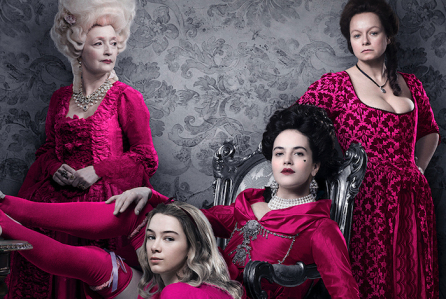 Hulu’s lascivious drama Harlots debuted its second season last week, and the show picked right back up where it left off last season with grotesque, violent and pornographic depictions of life for prostitutes in 1700s London. Wednesday’s “Episode 3,” the show decides to get more digs in at Christianity and one character’s fall from grace in a particularly offensive scene.

The two main Christian characters are mother and daughter, Florence (Dorothy Atkinson) and Amelia (Jordon Stevens) Scanwell, respectively. The Scanwell women are poor and have moved in with bawdy Margaret Wells, but the two still stand outside various houses of ill repute to preach the gospel and try to save the girls from a life of prostitution, though Florence does most of the talking.

In season 1 we saw Amelia's fall from grace as she began having a fling with harlot Violet Cross (Rosalind Eleazar). After Violet was arrested for thievery, Amelia talked Justice Josiah Hunt (Sebastian Armesto) into allowing Violet to stay with him as a maid because she said she wants the chance to “save her soul.” He agreed and is also allowing Amelia to give Violet reading lessons.

Though Amelia truly does want to teach Violet how to read, the lessons have also served as a cover for the two to explore their attraction to each other further, unbeknownst to Florence, though she does suspect Violet is corrupting Amelia in some way.

In this scene, the women talk of their secret lesbian affair using sacrilegious double entendres about doing the "Lord's work" and feeling each other's sin.

Violet: Thank God. He keeps talking to me.

Justice Hunt: I was surprised to see you this morning. I would not have thought the Wells house a fitting place.

Justice Hunt: It saddens me that you’re in need of charity. May I be of help?

Amelia: You do much already by allowing me to do the Lord’s work with Violet.

Violet: She feels me, sir, feels my sin.

Justice: Then I will leave you in Miss Scanwell’s good hands.

Amelia: What are you doing?

Violet: I think it’s time I felt your sin.

Yes, the justice has a severe stutter. In addition, the only other character not involved with prostitution, Florence Scanwell, is blind. I’m not sure if the writers are trying to make some sort of statement with giving the two characters with morals physical flaws, but it’s interesting to note.