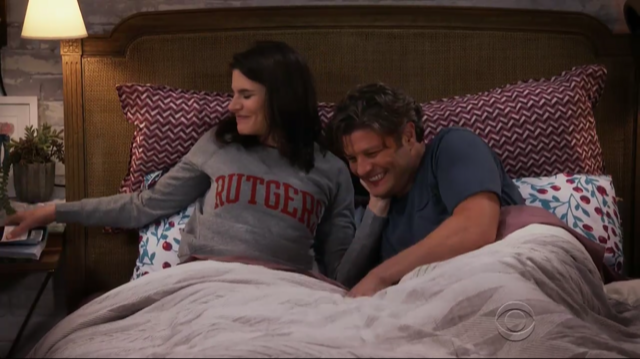 A person's a person, no matter how small. - Dr. Seuss

Despite getting off to a rough start and having a flawed concept to begin with, CBS’s new comedy Living Biblically did something very few shows from Hollywood would dare to do - they admitted to the humanity of living, unborn children. Main character Chip (Jay R. Ferguson) speaks to his baby through his pregnant wife’s belly and rightfully calls him or her a “person.”

After the death of his best friend and learning that his wife Leslie (Lindsey Kraft) is expecting their first child, Chip resolves to improve his life by living according to the Bible. At the beginning of Monday’s episode, “Love Thy Neighbor,” Chip lays down with his wife and, in a very pro-life moment, excitedly speaks to the baby while acknowledging its personhood:

Chip: Can you believe there's a little person in there?

Leslie: Yeah. I was there when it happened.

The better question would be, “Can you believe Hollywood finally admitted there’s a little person in there and that it's more than just a “clump of cells” or parasitic lice?" Those who support abortion change the language they use to describe pregnancy based on if the mother wants a child but the truth is a preborn baby is a little person, whether he or she is "wanted" or not. I doubt Hollywood has actually come to its senses and become pro-life, but we’ll take what we can get.