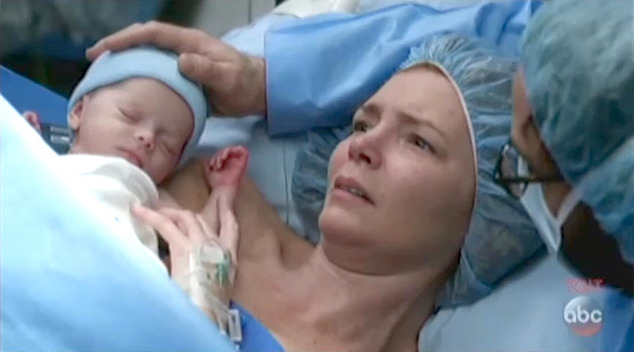 In a society where preborn children are treated as disposable property, and disregarded in the name of cold, sterile, euphemisms such as “reproductive rights” and “choice,” it’s rare to find a mother who actually does the opposite of putting herself above her child.

But in April 27th’s episode of Grey’s Anatomy on ABC, we got to see that rarity played out in a heart-wrenching yet inspiring storyline.

Patient Veronica is in the ER at Grey-Sloan Memorial Hospital for back pain. She’s almost 35 weeks pregnant and her body is riddled with cancer. She decided to forgo cancer treatment because, as she put it, “I didn’t want to microwave the baby.”

The storyline is a continuation from earlier this season when Veronica refused to abort her baby despite pressure from Doctor Miranda Bailey (Chandra Wilson) to kill her child to begin treatments for her terminal pancreatic cancer. (See previous article for factual information on cancer during pregnancy as well, as this episode did not accurately reflect the truth on the effects of chemotherapy and radiation on a preborn baby.)

The prognosis isn’t good, as was expected, and as Veronica planned for. The doctors give her two months at best left to live, as the cancer has spread even further and is compressing her spinal cord. And they tell her that they must deliver the baby that day.

“All right. Let’s cheer up, everybody. We’re having a baby,” Veronica announces optimistically, looking forward to having two months to spend with her baby and the baby’s father.

But during the C-section, things take a turn for the worst:

Amelia: Heart rate's up to 130. Veronica, how's your breathing?

Veronica: Hey, Jer, come on. Look at him. He has the sweetest eyes.

Amelia: Let's put her back on high-flow oxygen. It could be an embolus.

Veronica: Time to get him out of here.

Alex: Yeah, in a minute.

Arizona: If it's an embolus, we don't have a minute.

Alex: She did all this so she can meet the baby. Just give them another damn minute.

Veronica: Jer, can you take him?

Alex: He needs to go to the NICU now.

Jeremy: And, uh, what -- what about Veronica?

Veronica: Jer, you stay with him. You promised. I'm counting on you.

Veronica: Go on. Stay with him. I'll see you in a little bit.

Amelia: Are we pushing heparin or going straight to thrombolytics?

Arizona: Thrombolytics are contraindicated. We need to do an embolectomy, and let's get an ivc filter.

Amelia: Veronica, you've thrown a blood clot, and it's traveled all the way to your lungs. It's very serious. We need to remove it immediately, so we're gonna need to put you under and open up your chest.

Amelia: The procedure will only last about a half an hour.

Veronica: Will it work?

Veronica: And what if we didn't do anything?

Arizona: Veronica, we need to do this procedure. If we don't, you might not make it off this table today.

Veronica: No. I signed that dnr for a reason.

Arizona: You can rescind. Let us help you.

Too bad Dr. Miranda Bailey wasn’t around to see that beautiful baby alive and well thanks to his mother not listening to her pro-abortive advice.

Later, we see Veronica in her last moments and realize even further what an amazing mother she was to give up her own life for her child’s:

Amelia: I'll get a warming blanket.

Yes, Veronica, you did good. And your baby is so very good because of your beautiful sacrifice.