Wednesday night’s episode of Fox’s newest racially obsessed drama Shots Fired, “Hour 7: Content of Their Character,” took a short break from race-baiting to highlight the unnecessary destruction that comes from riots like Ferguson and Baltimore.

In the wake of violent demonstrations in Gate Station, DOJ Special Prosecutor Preston Terry (Stephen James) becomes disheartened at the sight of the devastation of his kind friend’s restaurant. He states the obvious regarding the destructive riots: “I don't know what's supposed to be gained by all this.”

Dabney: I knew this boy in 'Nam. Stabbed himself with a bayonet, ruptured an artery, and almost died. We were fighting an enemy we couldn't see, and there was no way to win. The best you could hope for in that bush was a way out. The boy in 'Nam got sent home. We did this to ourselves and still can't get out.

Terry: I'm sorry. I never meant for this to happen. I just wanted to help. The Department of Justice is pulling me from this investigation.

Dabney: Thank you, Ms. Woods. Me too.

Woods: Any words for the people of this community? Any words?

Woods: Are you asking on behalf of the DOJ or yourself? Off the record.

Terry: I'm angry at the people who did this. I'm angry at the shootings of Jesse and Joey. I'm angry at myself for... Turn it back on. The Department of Justice is concerned for the safety and well being of all members of the community. We're offering our assistance to the governor and local law enforcement in whatever way they should require.

Woods: I wish I could have done more too.

Later, Prosecutor Terry steps in between a police officer and a black man about to fight. As the black man eggs on the police officer, Terry yells at him and the crowd, “You want to give them a reason to beat you down? Arrest you in the middle of the street? And then what, huh?...You want to give them an excuse to hurt you, then that's on you. But I'm telling you right now, man to man, I'm telling all of you, I'm going to find out who killed Joey Campbell….And I'm going to find out what happened to Jesse. And once the truth is out there for everyone to see, we can change things.” 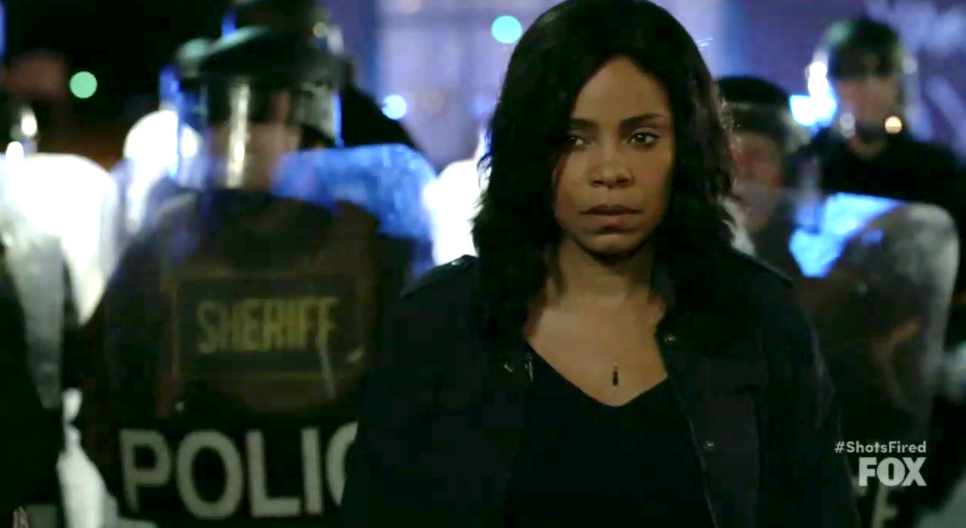 While an inspiring speech, it’s unfortunate that it’s considered earth shattering to suggest that people stop engaging in violent destruction of cities before learning the facts of a situation. All Terry demands is that justice be done.

It’s even more unfortunate that Shots Fired will probably have fewer episodes like this one, calming race relations, and more episodes likes this, throwing fuel on the fire of racial polarization.