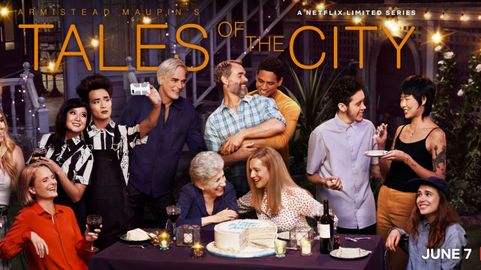 Imagine it’s Friday night, and you are surfing Netflix for a good movie or perhaps a nice show to binge watch. Say you come across the following title and description: Armistead Maupin’s Tales of the City: “Returning to San Francisco after a long absence, Mary Ann Singleton reunites with the community of characters at 28 Barbary Lane.”

Sounds harmless, right? Wrong. Unless you were familiar with the novels by Armistead Maupin, the previous miniseries from almost 20 years ago, or had researched the show further, you probably would be shocked by the end of the first episode.

Because the show is set in modern day San Francisco, it’s only reasonable to expect some LGBTQ+ propaganda; however, Netflix fails to be upfront that the entire premise is based on an LGBTQ community (at least in the description—but they more than make up for that in the show itself). In fact, it is pretty clear early on that just about everyone is gay, or queer, other than Mary Ann Singleton (Laura Linney) and her ex-husband Brian Hawkins (Paul Gross).

By the end of the first episode we find out Anna (Olympia Dukakis), the matriarch-like figure of the close-knit community on Barbary Lane, and Jake (Garcia), one of the tenants, are both transgender. In fact, one episode is devoted entirely to Anna’s beginnings as a transwoman in San Francisco.

Every episode is jam packed with LGBTQ content including unnecessary nudity, graphic sex, threesomes, and lots of other adult content that no one needed or wanted to see regardless of sexual or gender identity politics. (Although let’s be honest, the whole series is unnecessary). Anyone still watching after the second episode is probably either bored to death, crazy, or writing this article.

Throughout the show, we see all of the trials and tribulations the tenants face—specifically in their relationships. Shawna (Ellen Page), Mary Anne’s adopted daughter, takes a strange romantic interest in a couple (husband and wife) she goes home from the bar with and continues to see them on and off throughout the series.

Another couple, Margo (May Hong) and Jake, struggles with Jake’s transition from a woman to a man. Jake and Margo have been together since before Jake’s transition, however, after the transition Margo isn’t sure she wants to be with a man, and Jake thinks “he” may be interested in other men rather than women. This causes complications in their relationship and ultimately leads them to split up.

The show is also full of loads of other liberal content. For example, two of the tenants run a plant shop called Plant Parenthood—a not-so-subtle reference to liberals’ favorite abortion facility with a similar sounding name—Planned Parenthood. One character points out that it’s old fashioned to believe female strippers are counterproductive to the feminist movement. A few characters also speak negatively of capitalism. At one point, Shawna finds out her biological mother slept around a lot and therefore did not know who her father was. Instead of being upset, Margo writes this off as a totally respectable lifestyle preference.

In summary, all I can say is I am glad this is simply a limited miniseries—if they packed that much liberal bias and unappealing content into a mere ten episodes, I can only imagine how much further they would’ve been willing to take it in another season. Hopefully, it’ll be another 20 years before they try another revival again.