Royal Series Explains Pregnancy as 'A Human Creature Growing Inside You' 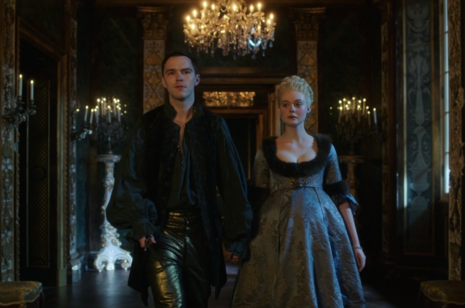 With the title character Catherine the Great (Elle Fanning, Super 8) expecting a royal heir in season two of Hulu’s The Great (released November 19), her pregnancy is a key part of the story. Instead of acting as though the baby is simply something that will become human in the future, they make it clear that he is already a human being, their child, and a member of the family.

As an 18th-century royal family, they assume the baby would be a boy and have already named him Paul. Catherine’s estranged husband Peter (Nicholas Hoult, About a Boy, Mad Max: Fury Road) adores the baby, frequently speaking to her belly to tell him hello and that he loves him. He tells Catherine to be careful so that she and the baby don’t get hurt, warning her in episode 1 “Heads It’s Me” that getting hurt would mean “killing you or Paul…can you imagine how upset I’d be?” He cries because he wants to be with her and their child throughout the pregnancy.

As they negotiate the terms of peace between them, he insists on having breakfast with Paul every day. Catherine agrees and they begin having breakfast together. In episode 4 “The Devil’s Lunch”, they have a moving conversation about the baby in which he is clearly discussed as a human being at breakfast.

Peter: Hello, Paul! Can we go see how the nursery is coming along today?

Catherine: It’s sort of unimaginable. This, in here will be a walking, talking being.

Peter: Also a singing, dancing, hunting, and fucking one.

Peter: Well, he will be extraordinary.

Peter: It must be strange, a human creature inside you.

This is generally an odd, unpleasant show full of gratuitous sex, violence, and the crudest possible language for any situation. The Great makes a mockery of religion, marriage, and most things that make a society decent. The creators had a chance to make this show smart and fun, but chose to appeal to the lowest common denominator.

Therefore, it was a rather pleasant surprise to hear an unborn child spoken of with love and respect.